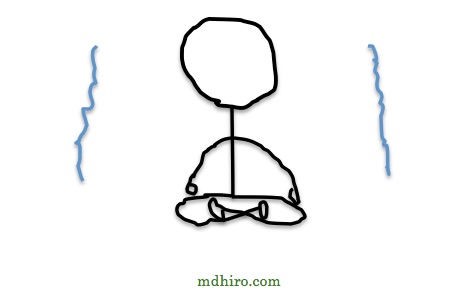 In the last few weeks, I moved a lot:
Mongolia→Japan→Canada (3 hours in downtown) →Chile→Japan→Mongolia.
And I had to go through several problems (That’s also why I couldn’t post anything in this blog). The list of problems goes: back pain due to the long flight (50 hours in total for one way to Chile), unexpected problem of Mongolian visa, apartment problems, etc.

It is quite normal that thing don’t go as we expect, which causes problems in some way. Actually, life is full of problems, be it big or small. When we have them, what will we do? Do something, be patient or do nothing (I think being patient and doing nothing are different). Let’s take a stab at being patient.

In English, the word “Patient” has mainly two meanings: (1) a person who is under medical care or treatment, and (2) bearing provocation, annoyance, misfortune, delay, hardship, pain,etc., with fortitude and calm and without complaint, anger, or the like (Dictionary. com) The common thing between them is that both deal with problem. And the word stems from Latin “patī” which means to suffer.

I made the above drawing, because for me, suffering (being patient) is linked with sitting still, which reminds me of the notion of Buddhism. Although I am not so religious, I am attracted to  Buddhism way of thinking, mainly for the following three reasons: I like the value of simplification; Zen buddhism meditation catches my interest and; I agree with the basic teaching of Buddhism, which basically says that “the nature of life involves suffering, and humans tend to add  more problems with their desires”.

Well, in short, we have problems all the time, and it’s important to be patient by calming down and sitting still (e.g., meditation). Also, being patient is better when it’s internal instead of external (it is hard to be ptient when someone tell you to be.)

This time, I learned that:
Life is full of problems, and being patient can teach you how to deal with them.

Thank you for reading, if you have any comment, please feel free to put, and subscription is welcomed.

One thought on “Being Patient”