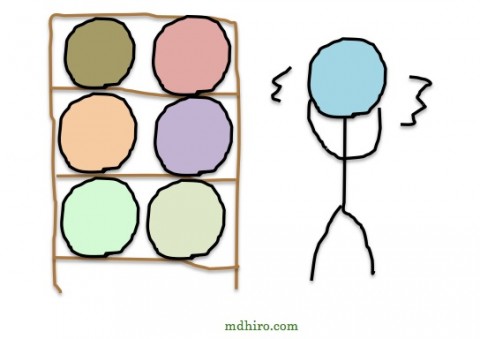 “Pick one thing, not many. Otherwise you end up failing on all.”

In my childhood, many adults told me this, and accepting this was difficult for someone like me who was curious about many different things.
But luckily we live in a society where such a diversity is embraced and even needed more and more, and it seems OK to be interested in many different things. To highlight this, let me talk about three different sources: (1) exhibition, (2) book and (3) video.

(1) Exhibition
Before I left Japan this February, I went to an exhibition of Leonardo da Vinci (1452-1519), who was known to be one of the most multifaceted men of the human history (painter, draftsman, inventor, anatomist, musician and philosopher).

From the exhibition, I could see why he was such a great multifaceted man for the following points:
Curiosity: he was curious about many things
Record: he wrote down everything he came up with
Trial: he tried to embody his ideas
Learning: he never stopped learning (largely self-educated)
Connection: He connected various things such as art, nature and science.

Back then, some people criticized for what he was doing, but he never stopped following his passion. He had no formal education. Does the current education system prepare children for becoming that kind of person?

(2) Book
I just finished a book called “One Person / Multiple Careers: The Original Guide to the Slash Career” (Marci Alboher, 2012)
As the title says, this book is introducing some people with slash careers (e.g. film maker/lawyer, business man/rapper, musician/real state, etc.), and explains that usually other careers can be connected among each other, just like Leonardo da Vinci.

Here are some quotes from the book:

(3) Video
To see is to believe. Please look at this TED talk by Emilie Wapnick
【Why some of us don’t have one true calling】

Looking at those above mentioned three parts, it is fair to say that doing more than one thing is totally fine.

What ‘s important to keep in mind is that we are born with curiosity, but people with “Pick one thing”-mind might destroy the possibility to become multifaceted person. Although it’s totally fine to nurture specialists or generalists, it’s good to have a space to embrace “pick more than one thing” mind, so that more and more Leonardo da Vinci will appear in the future.

To this date, luckily I am still interested in many things (art, music, dance, cooking, etc.) and it can be boiled down to one thing “make something”. Knowing that “it is fine that way” makes me feel much better, and I think this applies to others, too.

This time, I learned that:
It is totally ok to have many interests including the ones for career, as long as you try and learn things in those areas, just like planting many seeds and nurture them well.

2 thoughts on “Embrace the Multifaceted”