Do you believe in good crime?

Today, an impressive Chilean news came out, which made me want to write this.

Papa frita? Yes, Chilean people consume it so much. But what I refer to is something else, more accurately someone else, a hero who calls himself “papa frita”. In short, he did something against the law but something very remarkable to help people.

What happened was that one Chilean University (Universidad del mar) had a bankruptcy and it could no longer issue university certificate. However, given that the students and parents had signed to pay, they had to keep paying although they wouldn’t obtain any degree.

In other words, they were paying something that they were not consuming, and the cost in total was 5 million USD.

Then here comes one guy whose name is Papa Frita who entered the place where all the students’ contracts were reserved. Lying that he was investigating those, he took everything out of there and…….he burned them all!!!!

Let me clarify. The students no longer need to pay for something that they are not consuming, thanks to this “papa frita”, the same name of the food that most of Chilean people consume.

Obviously, what he did was against the law, but who can judge him?

Probably he will be arrested or something but people will support him. If there happens a protest, I would like to support, because as a person who keeps paying the university debt, I know that this his action has a great significance for both the students involved and whoever sees this news like me.

What’s more interesting is that he is an artist, and all of his actions are now exhibited at el GAM in Santiago, Chile.

As soon as I saw this news, I could not help but go to see it. Event though it was a small exhibition, after knowing all the context, it was a masterpiece for me . In a sense he is a real hip hopper who insisted in expressing. 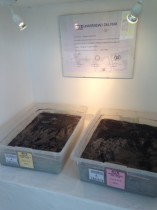 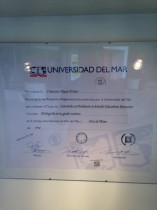 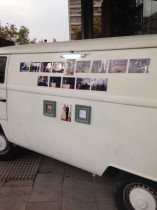 Do you believe in good crime? I do.