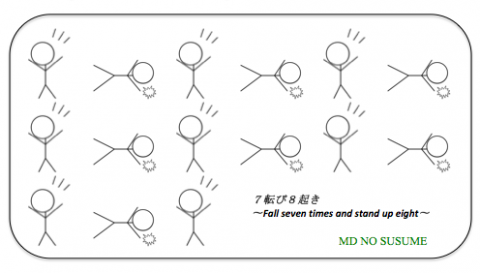 The Japanese proverb says that 七転び八起き (Nana Korobi Ya oki), which literally means Fall seven times, stand up eight. This implies positive message to face with many difficulties in a life.

In the previous entry (Failure and Learning) in which I explained the importance of re-thinking the notion of failure , I put the following four points:

Obviously, the most important point is number (3).
No matter how many times you fall, you will eventually achieve your goal as long as you keep standing up, and this kind of passion and perseverance to achieve long term goal is called “Grit”.

Grit is a non-cognitive skills and hard to measure, which is different from cognitive skills such as IQ.
According to Angela Duckworth who gave a TED talk on Grit, the key to a success in the long run can be associated more with grit than IQ.
【The Key to SuccessーGrit】

“Grit is living life like it’s a marathon, not a sprint“ーAngela Duckworth

You can also find out your grit score in this link

A good example of how grit can lead to success is the famous “Marshmallow test” conducted in the late 1960s at Stanford, which demonstrated the correlation between perseverance and future success.
How? the research team tested 4-year old children in a small room with a piece of marshmallow. Kids were told that they could eat it immediately, but they were allowed to eat two marshmallows only if they could wait until the researcher comes back to the room (eat one now or eat two later). The research tracked the then-children for a few decades, and the finding was that children who got two marshmallows by waiting for 15 minutes had, on average, better behavior skills, less prone to addiction, and had better academic score than those who couldn’t wait and ate marshmallows immediately.

So it seems that grit is very important. Then next question will be “how can we develop Grit?” Well, there is no one-size-fit-all answer to this, but one important approach is re-value the effort rather than the talent. For example, if you are parent or educator, you can say to a kid “you worked very hard!” instead of “you are such a smart person!”

In terms of teaching non-cognitive skills such as perseverance, Japanese education can shed light on this. Of course, there are many problems in Japanese education problem and I can continue to criticize (college exam-based teaching, lack of focus on practical foreign language acquisition, you name it). But there are also some strengths that Japan should be proud of, one of which is cultivating the sprit of perseverance.

According to an interesting article (Why Japanese Education Succeeds: Amae, Stress, And Perseverance), attachment (Amae in Japanese) that baby/child receives as well as culture of never giving up can develop perseverance.

This can be also demonstrated with a word “頑張れ (ganbare)” which means “persevere” in Japanese. This word is so omnipresent in Japanese society that you hear it everywhere when you are facing any task (especially you hear this many times by your teachers). “Ganbare” implies that you might fail and you don’t have to win, but you have to keep trying to achieve the goal without never giving up.

Japanese perseverance is pretty common at an international level as well, especially when a natural disaster occurs. For example, the resilience and perseverance of victims of Tohoku disaster in 2011 impressed all over the world, because people waited for long time in an organized line, and when the supply was run out, people didn’t even complain (for more detail, see the link). So it is believed that this Japanese sprit of never giving up contributed to achieve a long term goal such as economic development after the WW2. I personally think that now is the time to set another goal and go for it without never giving, just like the proverb I introduced in the beginning.

Key to a success is “Grit” (perseverance and passion to achieve a long term goal) as well as learning rather than natural talent, and they can be nurtured from childhood by re-valuing the effort by parents/educators.