What do you picture from the word “Hip Hop”

When I introduce myself, I tend to do play with one experiment.
I: I teach dance at school.
Other: Oh, what kind of dance?

Answer 1: Ballet (Lie)
Answer 2: Hip Hop
It’s interesting that when I say “Ballet” they tend to believe that I am a elegant or sensitive guy whereas when telling Hip Hop, they se me as if I were a young, loose or even untidy person.

Until 10 years ago when I started break dancing, my image of Hip Hop was a bunch of guys with baggy clothes hanging out on the street. Yes I was naive.

Unlike that kind of general image, Hip Hop has been used in classrooms and there are scientific results that it really promotes learning.

Looking at these four elements, there is no wonder that Hip Hop can be used to promote learning. When you switch the way to look at things, they are similar subjects that are taught in schools such as
1. Music
2. Playing with words and singing
3. Drawing
4. Dance

In the summer of 2011, I was in Guatemala to do some workshops for 80 elementary school teachers. Even though I was not sure they would like, some teachers said that my Hip Hop workshop was one of the best workshops. 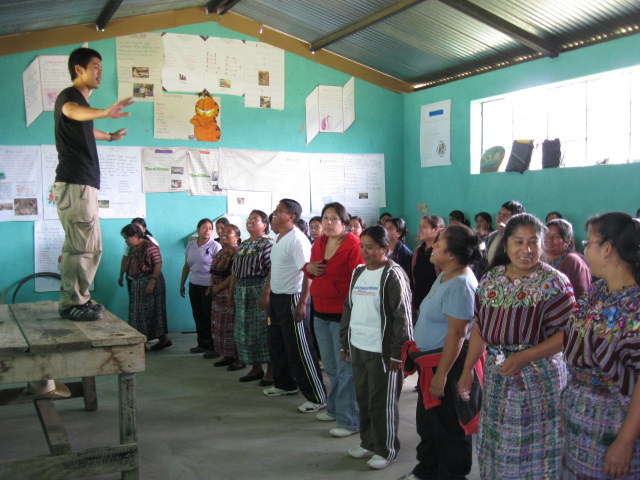 [Photo of the workshop (Break dance)]

Hip Hop is a way of self-expression, and it may work in classroom especially where there are a lot of conflicts.
“Freedom Writers” – a movie about race and education in the U.S. also addresses the art of Hip Hop.
One white female teacher was assigned to junior English class where there are diverse students suffering from violence and hating each other races.
Her tactic was to let them express, in the form of writing. Having learned that they could change something if they wanted to, they started reading and writing.
After finishing the diary of Anne Frank, the students decided to do fund raising party to talk to the key person who involved within Anne’s life (The person who hid her).

Personally, I loved the idea of holding Hip Hop dance contest as a main event of the fundraising, given that Hip Hop was originated from self expression- expression of anger, frustration and feeling through arts.
Trailer “Freedom Writer”

I believe education can make a difference. I will do the right things in my own way. That’s my Hip Hop.

One thought on “Hip Hop Education”