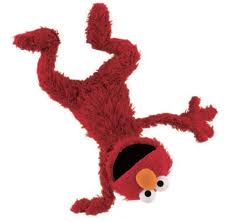 Do you remember Sesame Street?

Yes, that educational TV program in which Big bird, Cookie monster and Elmo appeared.
It’s been broadcasted over 40 years in more than 140 countries.
Being an educator, I realized how amazing this program was, given that through the program, kids can “enjoy learning” or “they don’t even realize they learned.”
Behind the scene, there are lots of actors who have put their efforts and creativities into this program.

“Being a Elmo“- a documentary movie about the guy who acted Elmo really inspired me. I didn’t even know that Elmo was pretty big black guy.

Kevin, who later became ELmo, was born and raised in a poor family. Loving to watching TV, he started dreaming about being a puppetter.
One day, he saw a TV program in which Jimmy Frank(famous puppetter) acted with a doll. Being inspired by that, he cut his dad’s court to make a pappet. He didn’t even think about being scolded by his father although the family barely had money to support their living, let alone buying a new coat. Surprisingly, what his father said was,
“what’s the name of the doll? Next time, just ask me.”

He started acting at the special education institution to help kids smile.
Even in high school, he kept on. While other students played basketball and football, he went on making dolls and acting with it. Although being teased on being “puppetter” he never gave up his hobby.
Then, finally he obtained the roll of Elmo.

Here are five important factors that made his dream come true.
1. Influence (TV)
2. Action with motivation (cut the coat)
3. Supporter (his dad’s permission)
4. Passion and efforts (Keep on doing)
5. Luck to the opportunity

Sesame street can teach us many things. So does the guy of Elmo.
El trailer: “Being Elmo”

A Japanese popular educational TV program, “Open Ponkikki” was created based on “Sesame street” No wonder it says “Open” (<=Sesame street was named from “Open Sesame”)

Those educational programs can be a key to open up your mind. At least they were to me.

3 thoughts on “Learning from Elmo”