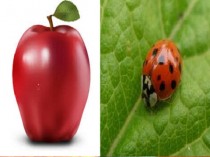 These days I am into books on people who had accomplished great achievements since there are many things to learn from them.

Among them, there are two persons between whom I cannot help but feel the strong similarities.
Those two are American Apple and Japanese Bug: Steve Jobs and Osamu Tezuka.

About Steve Jobs, since I talked about him on my previous post “Connecting the dots” I try not to repeat so much. As many know, he was ex-CEO of Apple and well-known as a strict person and seeker for perfection of products and simpleness of design.

On the other hand, let me explain briefly about Osamu Tezuka a.k.a Japanese bug. He was a guru of Japanese comics in the 20th century. Not only did he make tons of great manga (Astro boy, Kimba the White Lion, Black Jack to name a few), he also had a medical doctor’s license (although he never practiced medicine, it is one indicator of his extraordinary concentration and perseverance). He was often related to bugs because he was so fond of them that he put the letter of “虫” (meaning Bug) at the end of his author name.

First of all, both Jobs and Tezuka were so passionate about making the best arts (Apple products and Manga respectively) and never compromised. (of course money or honor were secondary to their creation)

Besides those general similarities, there was one link which intrigued me a lot, which was an interest in Buddhism: On one hand, Jobs kept mentioning that the concept of his simple product design was derived from Zen―Buddhism, which pursues only what is really needed for human life (the key is focus and simpleness); on the other hand, Osamu Tezuka created a great manga called “Buddha” by slightly modifying the real story of Buddha who was born as a prince (he later became Buddha when he got spiritually awaken, but never be a god) in India.

In short, although this religion and/or philosophical idea of Buddhism is embedded into my culture, I wasn’t so familiar with this concept so that I was so inspired Jobs to look back at what exactly “Zen―Buddhism” was.

Then when I read Tezuka’s 12-volume-long “Buddha” which was really interesting. In that, there was one phrase which was the principle idea of Buddhism, and I truly agree.

“Everything has a cause, and so is suffering. If you want to get rid of it, you have to look for its cause”

When I read Jobs’ book, I decided to do one thing when I went back to Japan: going to his favorite temple called “Moss temple” (“Saiho ji” in Japanese) funded more than 1200 years ago in Kyoto. This temple’s garden is literally filled with moss, and its natural beauty was registered a UNESCO world heritage site. The word “moss garden” just sounded really interesting to me so I was so delighted to have a chance to go back to Japan last month, all the more when I had the “All the way” value by spending 36 hours on flight to get there (Please see my previous entry “All the way value“).

But….life is not that easy.
I was naive enough to think that I just needed to come and visit that temple. However, it turned out that in order to visit some temples in Kyoto, you have to mail a letter in which you write the date you wish to visit at least a week before. And this moss temple was one of them, so that it was too late when I realized this.

Nevertheless, I am even more interested in returning there next time by bringing more “All the way” value.
Thanks to the link between American Apple and Japanese bug, now I have added one more think on my to-do list in my home country.

Instead of moss temple, I visited some temples. Kyoto has indeed a lot of profound places to go. Below I will show some pictures of what I saw.

See you in Kyoto. 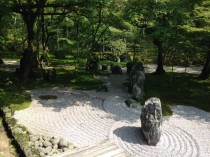 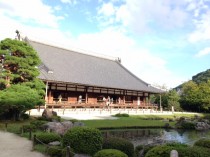 【Bamboo road @Arashi Yama, Kyoto】
There is something mysterious in this area

(I also learned that there are some temples where you are not allowed to take photos.)
These cultural spots really relax me and make me feel something spiritual.