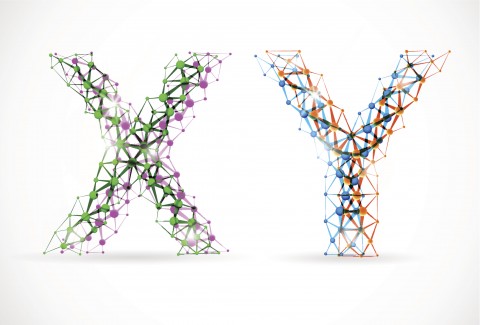 From those two sources, I realized how mysterious the system of X and Y is, about which I will talk about in this blog.

First of all, in the movie “Ma vie en Rose”, there is biologically a boy whose name is Ludovic, who was borned to believe that he is (will be) a girl. Despite everyone else’s opposition on her feminine attitude such as playing with dolls, putting on makeup, and wearing dresses, he does not understand why he is being told that those are bad things.

Then he comes to conclude an interesting theory about X and Y, the chromosome whose combination determines male or female (XX is female and XY male): he thinks that he was supposed to gain “XX” (female) but the god lost second “X” in the trash and he somehow got stuck with a “Y” instead (which made it “XY”=male). So he calls himself “girlboy”, but he believes to get “X” back to become a woman someday.

As you can imagine, nobody listened to him and his family and he himself almost got collapsed.

If this movie was taken place currently (again, the movie came out in 1997), people might have reacted differently. Nowadays, we tend to tolerate much more about the different idea on gender, as opposed to a couple of decades ago when the majority in the “minority groups” (LGTB, persons with disabilities, etc.) could not reveal their identity and there was little, if at all, support from the public.

This movie captures that important issue (and it was good to learn French).
【Ma Vie En Rose / My Life in Pink (1997) – Movie Trailer】

Speaking of X and Y, I came across an interesting TED video on this matter when I was doing TED surfing (once in a while I try to watch 15-20 TED video at once). What’s interesting about this video is that it’s not only talking about us human but also about other species such as insects, birds, fishes, etc.

Especially, the parts of Ants, painted turtles and Fishes were new and very exciting learning to me (you will see what I am talking about unless you’ve already known about this).

We are living in the world where people are more tolerant than before towards the different ideas and characteristic, so at least we are on a right track

In terms of Sex determination, there are many amazing facts about other species than human such as male ants not having fathers, hot chicks and cool dude of paint turtle or Clown fishes switching its sex in case of emergency.