Some say everything has a meaning and others say life is full of coincidences.
Most of the times, I agree with the latter, but I personally take a position of in between, because sometimes something unbelievable happens, and let me share one story that happened to me 5 years ago and 3 days ago.

It’s about my two trips to the Easter Island.

5 years ago, I was on a plane bound for the Easter Island, getting excited about how big the “Moai”s were. Before the take-off, one female passenger asked me to switch the seat because her friend’s seat was next to mine.
“Sure” I said, and moved to her original seat and there was a young guy next to me. His name was “Benjamin” who turned out to be a “Rapa Nui”―Indigenous people from the Easter Island.

After a couple of hours of chatting with my then poor Spanish, he asked me where I will be staying, and I said “Ni idea (no idea)”.

Then to my surprise, he kindly offered me to stay at his house!!

At first I was a bit doubtful but found him very frank and nice guy.
Through the visit, I could see that Rapa nui people were so close with each other and treat everybody including outsider like me as a family. I spent great time with his family and Rapa nui people back then.

Since then, I wrote to him several times but I haven’t heard from him.

Although I did not have much time, I just wanted to thank Benjamin again in person, then I decided to visit his house before going to bed.

The village has been slightly changed for the last 5 years, but I still remembered how to get to his house in which a big tree was penetrating from the floor to the roof. And, after 30 minutes of walking…..Voila! I found his house!

I stepped in and knocked the door…No answer.
I said out loud…. “Benjamin!!”… Still no answer.
Then I asked some neighbors about his current whereabouts, and I figured out that he had moved out to other house of the island.

Wondering “maybe that’s how it’s supposed to be..”, I went back to the hotel.
The next day, I got on a plane and left the island.

People of the island were as nice as the last time. It was interesting to see that their mentality was whole lot different from Chilean people (in  the continent), just like people in Patagonia. (See “Territory made up by humans”)

My trip was about to finish, but it did not end yet!

As soon as the plane landed at Santiago, there was a guy who tried to get out with his backpack, and the announce came soon after warning this guy
“please do not stand up yet since we have not arrived at the gate”

Everybody including me stared at him. Then he turned around and walked back to his seat.

When he passed through my seat, I saw his face and it was a young guy with a dark skin.

Then I saw him back again…. and I could not believe my eyes… and just uttered a word unconsciously.

The guy who was scolded via announce and returned to his seat just looked back and saw my face, saying

It was such an exciting moment.

As a result, we met twice in the same place:
first time in a plane to his island, and
second time we re-encountered on a plane bound for the place where I live.

Maybe we can meet back again, because sometimes, things are meant to be so.
It was once in a lifetime moment. 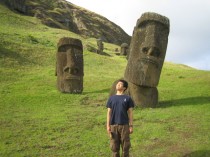