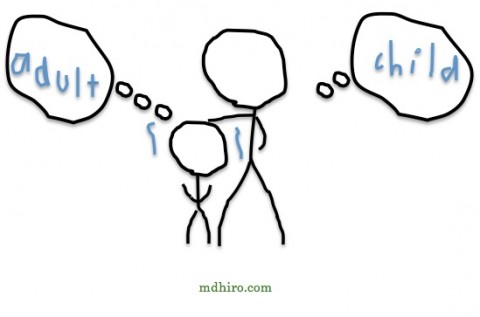 “You’d better stop being childish, you are an adult.” This is what I heard sometimes after in my late 20s. Let’s go back a liitle bit.

“Don’t be so childish, you will be an adult.” This is what I used to hear in my teens. Going back ever further?

“You are still a child, so it’s too early for you.” When I was around 6-8 years old, this was what adults told be when I said I wanted to do something like elder people.

Einstein said “Every child is born a genius.” Also, we all know that children learn things (e.g. languages) very quickly. They challenge, try, don’t be afraid of making mistakes. So, being childish doesn’t seem to be bad at all.

What is adult then?
According to the Cambridge Dictionaries, adult means “a person or animal that has grown to full size and strength”.
Of course physically there is a size distinction between child and adult, but I am not sure about the strength, especially mental strength. In fact, old childish people can exisit (30 years old onwards). And in fact, those who are still childish might be able to pursue their dreams, have innovative ideas, learn more things because of the features mentioend above.

Below are a couple of thoughts on child-adult dichotomy.

1. Play is only for children?
Last year, I took an online course on play through Futurelearn. It was interesting, but mostly it was about play for children. The older you get, the less you get to play? I hope to keep playful mind.

2. TED talk by 12 years old child
Thorugh my favorite podcast show, TED Radio Hour, I came across interesting TED speech made by 12 year-old child, which blew mind of adults (including me).

Adora Svitak: What adults can learn from kids

We can for sure learn from kids. And adults tend to underestimate what children can do, that’s why they think they have to control or overprotect them.

3. Giving children more flexibility
Kids can do more than what we think, if we give them spaces.

According to an article (Psychologists recommend children be bored in the summer) I found through my favorite news site”pocket”
a child develops best when, like a young plant, he is left undisturbed in the same soil. Too much travel, too much variety of impressions, are not good for the young, and cause them as they grow up to become incapable of enduring fruitful monotony.”

4. Child’s art
You think children’s drawing is only about sitting down and using colour pencils and papers? There is another type of drawing: grafitti. This 7-year-old graffiti artist is tagging up Brooklyn | New York Post

5. Children’s potential
When I was teaching, I saw many children’s endless potentials, which was “Wow” moment, because I had never expected that. That was the moment when they became beyond me. I used to say to parents, “Children are more capable of doing things than we think they are”, and they always noded as if they totally agreed with that statement.

So let’s not think that adults are better than children (some people think, or at least act that way), and maybe we can learn more from them.

Adult becoming childish is not as bad as we think, it might be a key to learn more things by opening the door we once closed.