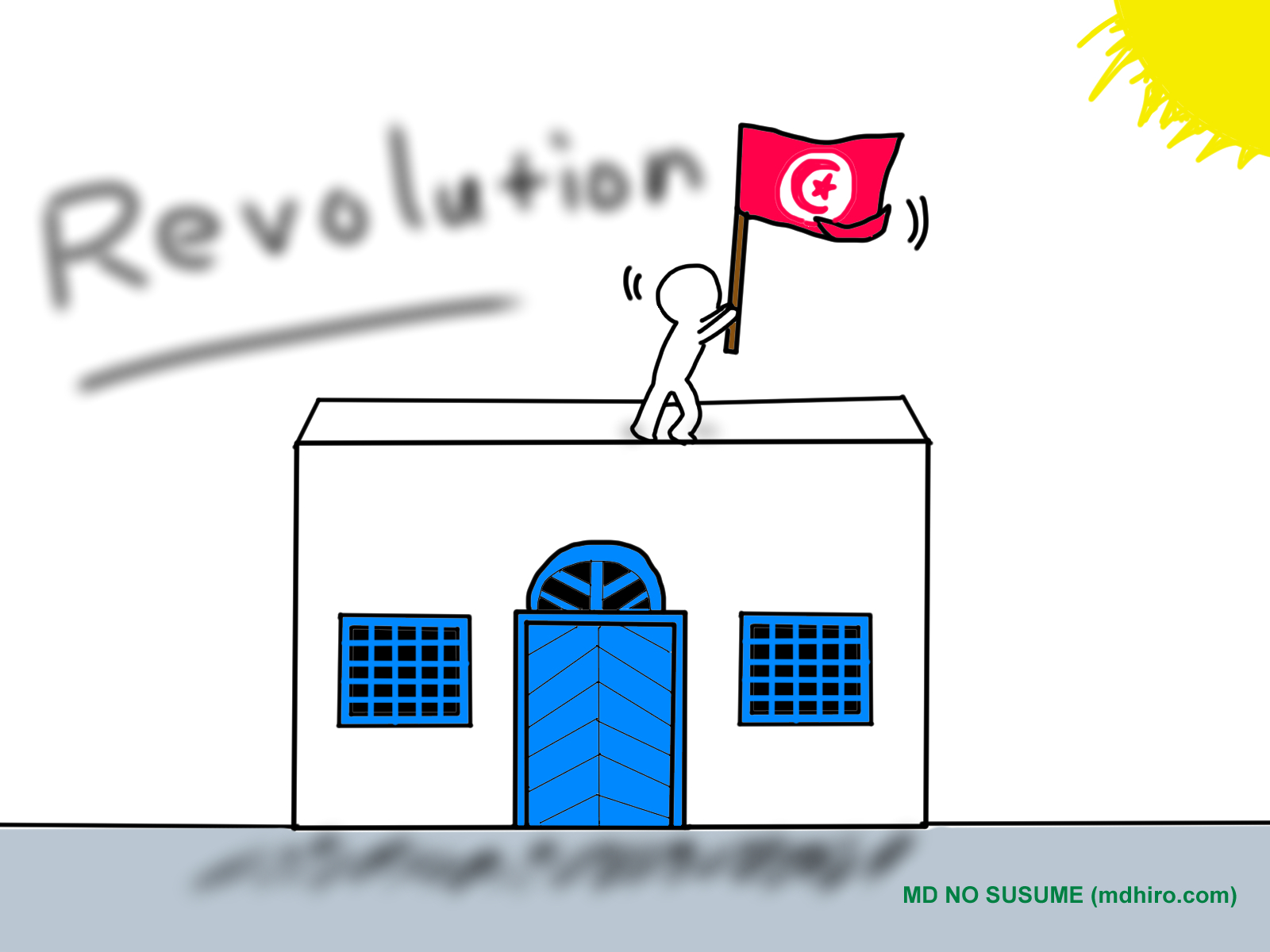 In April and May, my parents and friends in Japan talked about beautiful spring ー cherry blossom, good weather and foods and new starts (in Japan, school and fiscal year starts in April). At the same time, far away in Africa, I was in a Tunisia, the country well-known for different kind of SpringーArab Spring.

In 2011, it changed some Arabic nations and showed the power of people’s will. For those who are not familiar with Arab Spring, it is a series of anti-government protests movements that began in Tunisia and spread across the Middle East since late 2010 (Libya, Egypt, Yemen, Syria, Bahrain, etc.).

I happened to see this country’s name for the first time through New York Times  when I was brushing up my English skill to enter the graduate school 9 years ago. And this time, I had a chance to visit there, just for 1 night 2 days. Despite such a short time, I could see some snapshots of this country, which i would like to share, as Tunis seems to be a nice country to visit (many people also visit there as a hub before traveling somewhere else) but not much information is available.

Tunisia is a a Former French colony, and the majority of the population is Muslim (Arab 98%, European 1%, Jewish and other 1%) so the main language are Arabic and French (used for job and education) and the most of its land is covered by dessert.

Although these characteristics are similar to those of Mauritania, it seemed to me that Tunis (Capital of Tunisia) had more open atmosphere than Nouakchott (the capital of Mauritania where I live), partly because they sell alcohol in public and had more touristic places. People in Tunis were also open to talk about its revolution and social problem.

The Tunisian Revolution was an intensive campaign of civil resistance that was precipitated by high unemployment, food inflation, corruption, a lack of freedom of speech, poor living conditions, etc. The trigger was the death of Mohamed Bouazizi, a 26-year-old Tunisian street vendor, who set himself a fire as a radical form of protest, followed by intensive movement which ultimately led longtime President to resign and flee the country after 23 years in power.

Again, I was interested in knowing about this country of the revolution caused mainly by young people and social media. And the security seemed to be fine (although they had 2 terrorist attacks on tourists in 2015). This country is historically very rich and owns many interesting architect (I will introduce some below). The climate was quite good. Well no wonder it attracts many tourists.

And as I decided to travel from Mauritania to Egypt and Kennya, Tunisia was a good entry point (hub) to travers from West to North then to East Africa.

It seems there are quite many things to do in Tunisia, of which I could do a few (just around the airport). The good news is that the airpot is quite close to the touristic place and the city center, as shown in the map below. 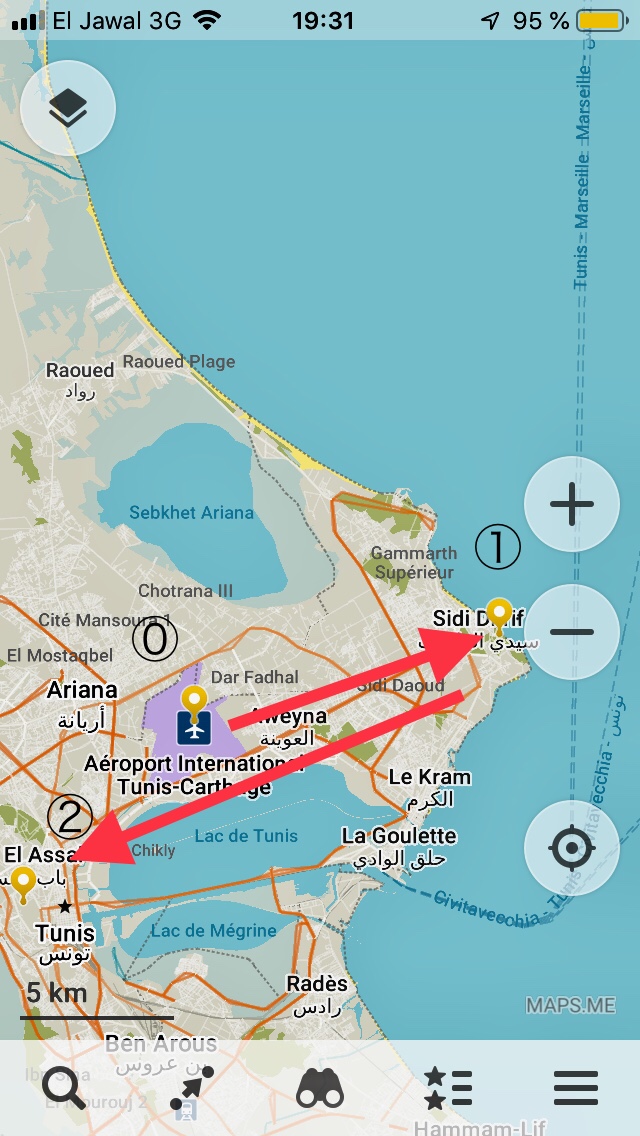 Also, during the transport, I had a nice taxi driver who agreed to turn on its meter (as many taxi drivers don’t prefer not doing so in order to get more money from tourists), and discussed about the revolution. According to him, the revolution benefitted only a handful people, and ordinary person like him are suffering more from the poverty even before the revolution. When he said “Spring for whom?” it was quite shocking. Although I cannot talk for everyone in the country, at least I learned that there is another story behind the brave and heroic revolution news I had read many years ago. 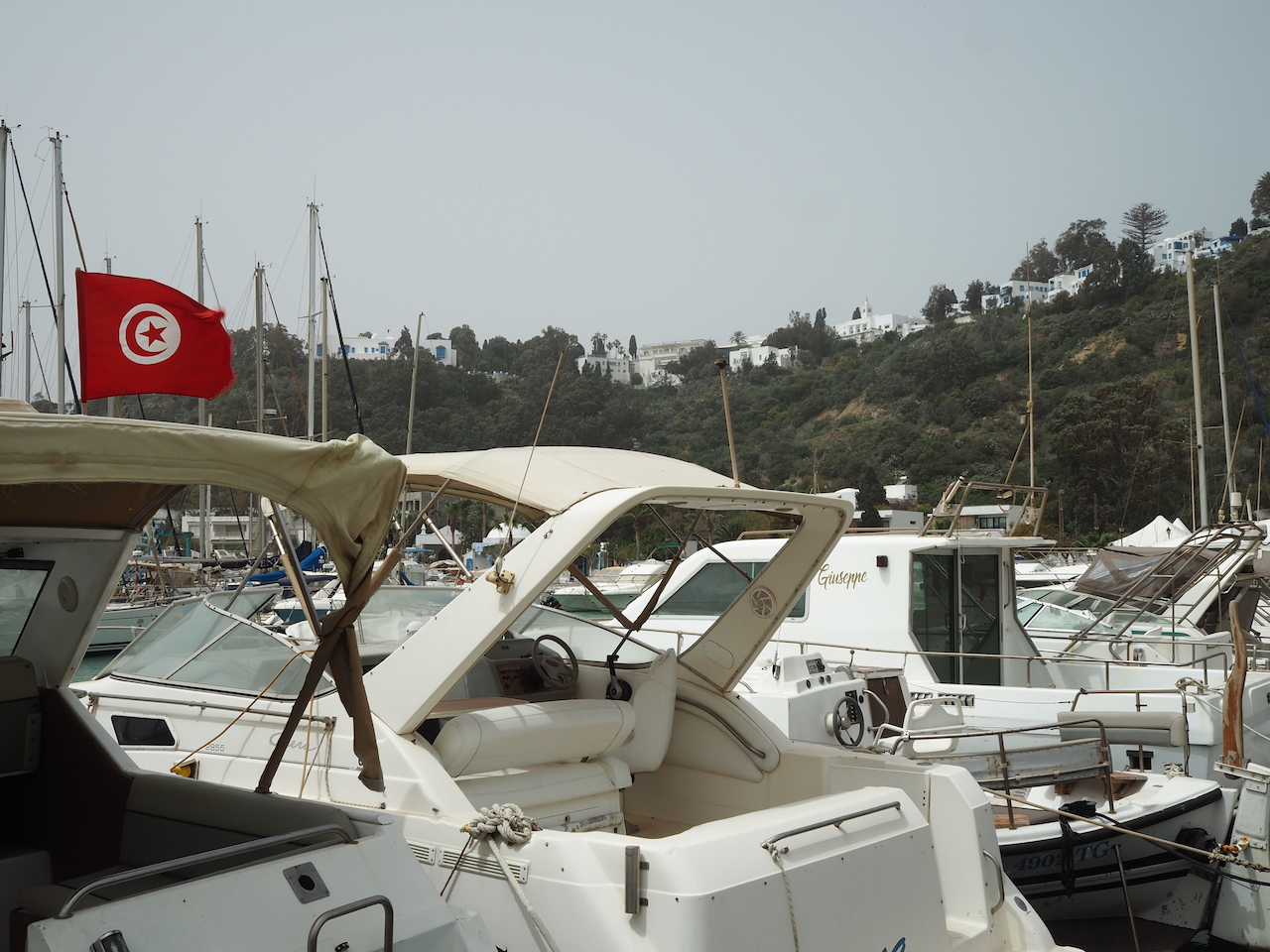 White and blue landscape: It was a bit similar to Chefchaouen in Morocco, but I liked the detail of the windows in Tunis 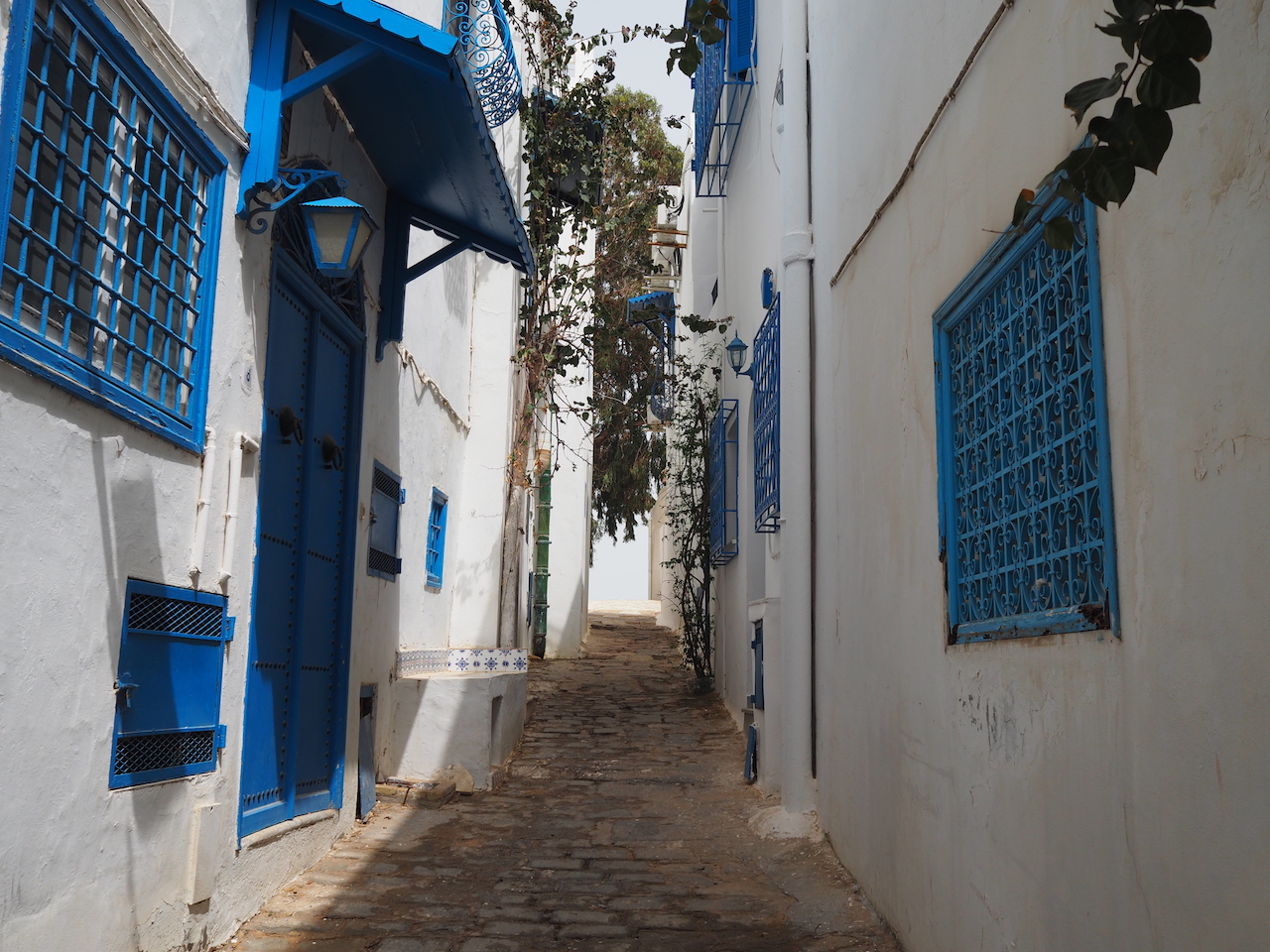 Artistic wall : It is quite open to street art like this graffiti (and it reminds me of break dance so I could not help doing it) 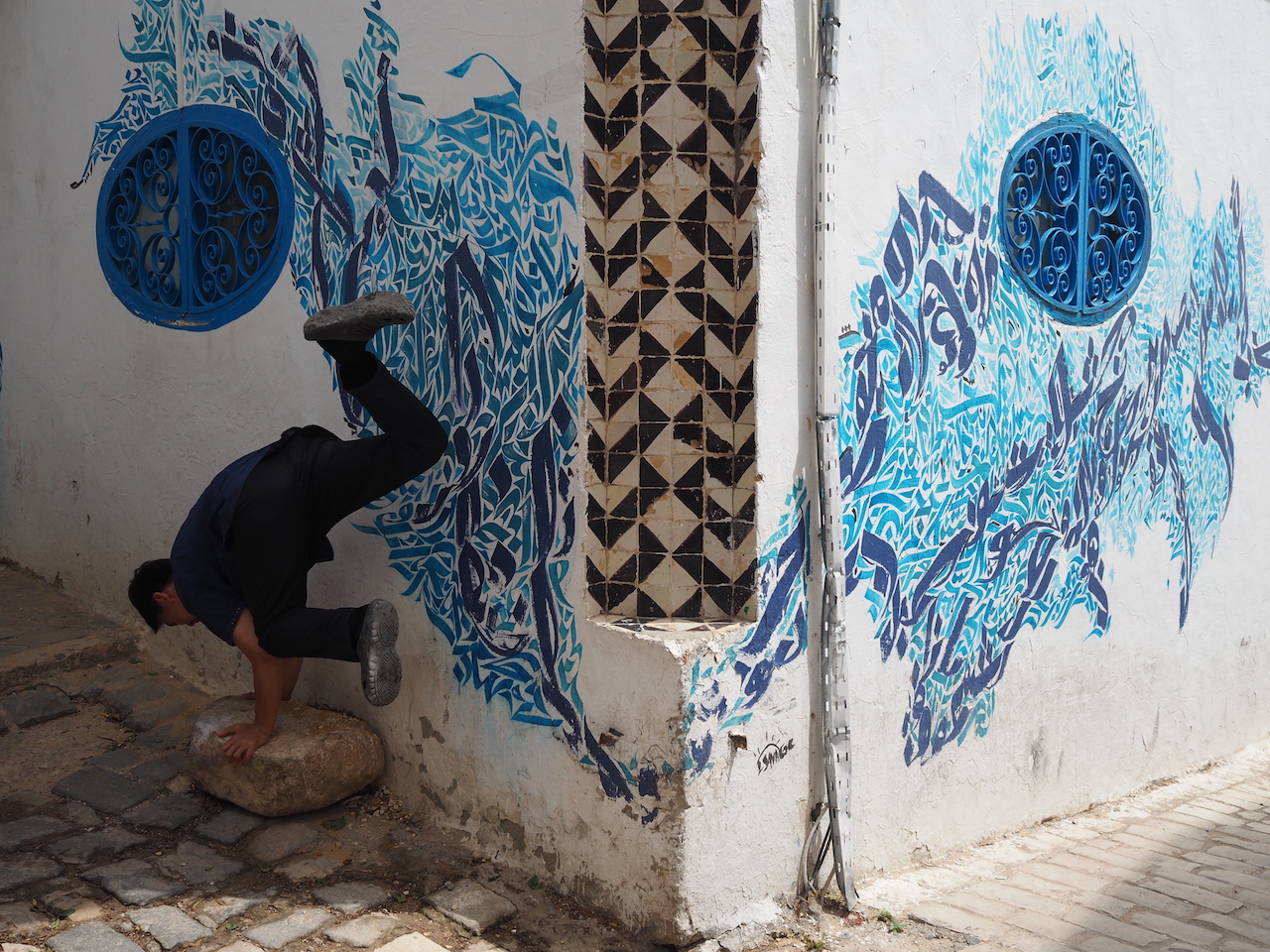 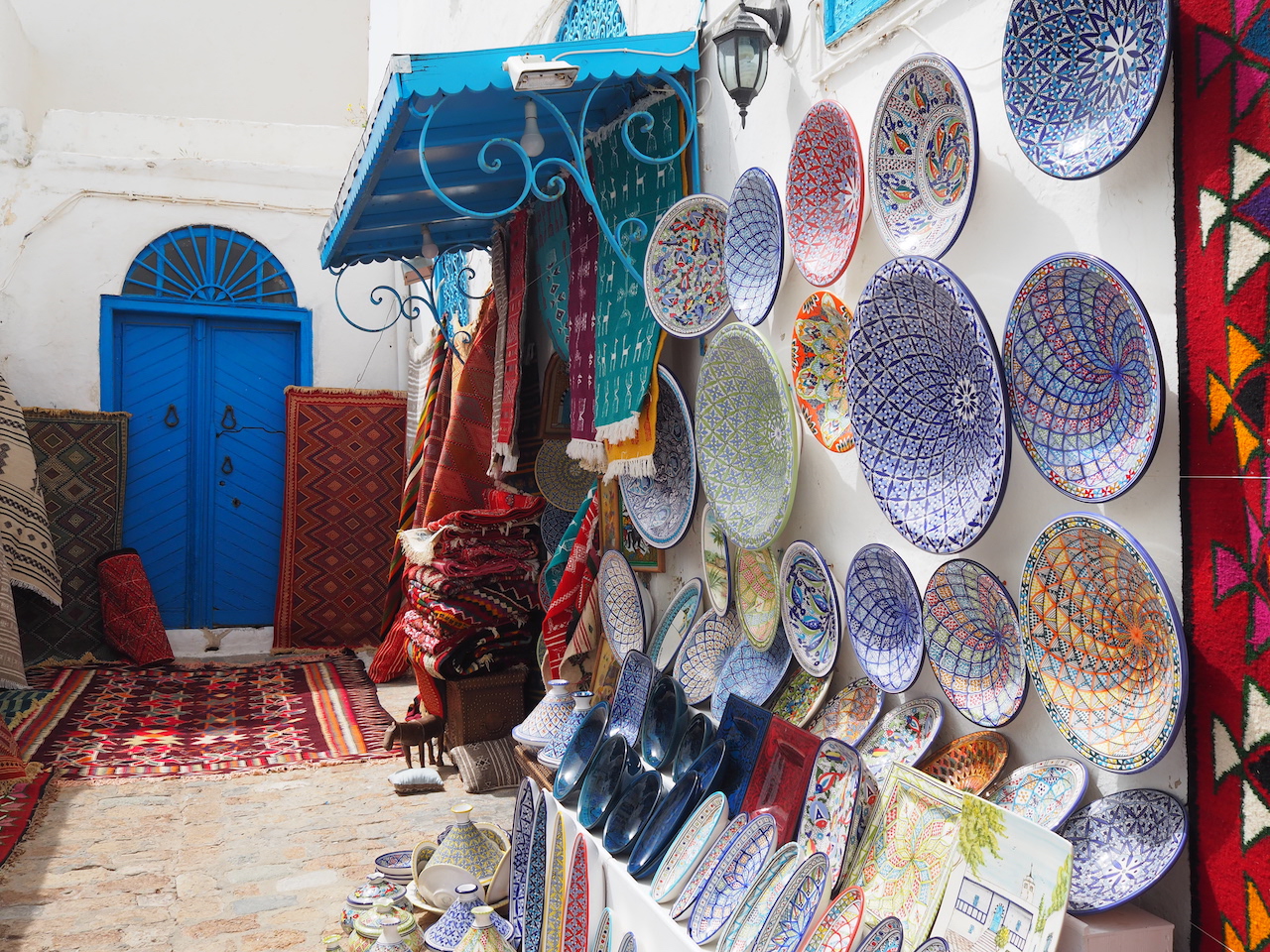 As far as walking on the street for more than 2 hours around Medina, the security seemed to be quite good and there was loverly atmosphere everywhere (fresh orange juice was cheap and delicious!). At night time, we could also drink alcohol with one of our friends who lived in Mauritania. I would like to come back to explore more.

In short, despite such a short time, we could enjoy a lot and see the difference of islamic countries (Tunisia and Mauritania). I would love to explore more (when I do, I will update this post).

Despite shot stay in Tunis, I saw the snapshot of its culture, people’s openness, different story behind the revolution, and diversity of islam and Africa,