Thanks to Japanese development promoted by the previous generations including my parents, I did not have to suffer from neither poverty nor lack of education.

To talk of development, it is essential to think about how and why the prosperity has occurred in some countries and not in other countries. In other words, it’s important to analyze why poor countries continue to be poor.

These issues are well explained in the book called “Why Nations Fail: The Origins of Power, Prosperity and Poverty (Daron Acemoglu, James Robinson. 2012).

Since my kindle (200g) already has 20 books including this 545-page-long book, I could read it anywhere I went. (Otherwise I would have taken more time to finish it.)

The Price? An interesting fact is that the price of this book’s kindle edition at this moment (June 14, 2014) varies between two different site, “amazon.com” and “amazon.co.jp (Japanese)” : 10 USD and 7 USD (694 yen) respectively.
So as I said in the previous entry “9 Reasons to buy kindle“, if you have both accounts, you can compare the prices and buy the cheaper one. (Unfortunately, I did not know that Japanese one had the kindle edition of this book so I missed the chance to save 3 USD.) 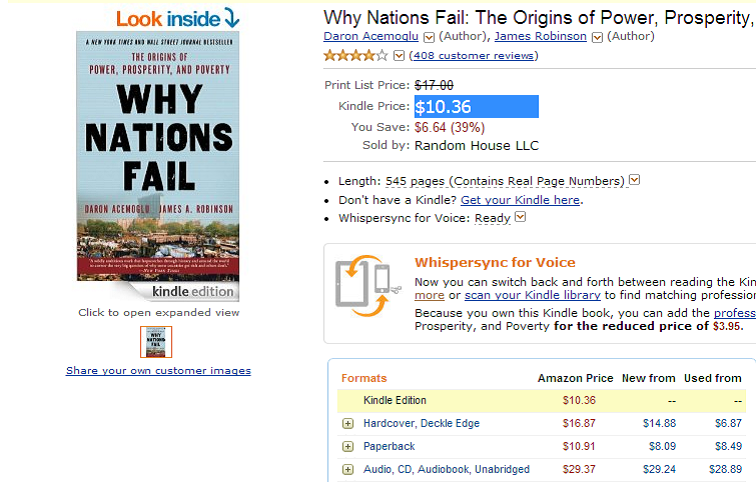 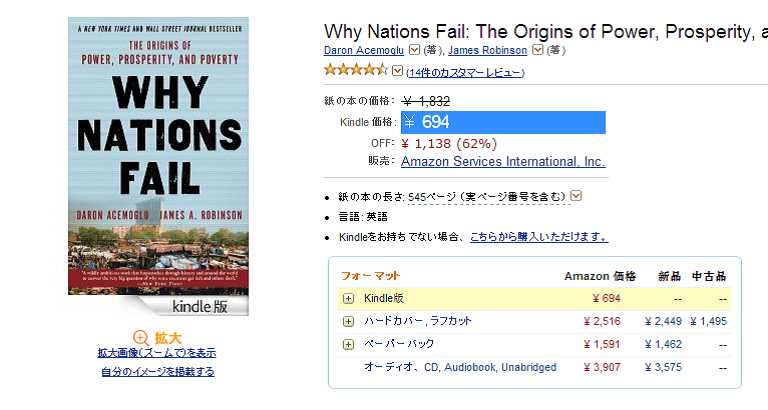 Like I said before, I will take advantage of the kindle’s highlights function and cite some of my highlights (first I copied every highlights on my kindle website and I pasted on my Evernote (note software), and picked up some of them.) I think this function can be used to cite efficiently for writing a research paper or something.

As a summary of this book, the authors argue that the origin of poverty lies in the political institution, and that none of the theories related to culture, geography, and ignorance explains the poverty (A good example is north and south Korea which used to be one nation).

Central thesis of this book is that economic growth and prosperity are associated with inclusive economic and political institutions, while extractive institutions typically lead to stagnation and poverty

Inclusive economic institutions also pave the way for two other engines of prosperity: technology and education

Though the policies of Stalin and subsequent Soviet leaders could produce rapid economic growth, they could not do so in a sustained way. By the 1970s, economic growth had all but stopped. The most important lesson is that extractive institutions cannot generate sustained technological change for two reasons: the lack of economic incentives and resistance by the elites

World inequality today exists because during the nineteenth and twentieth centuries some nations were able to take advantage of the Industrial Revolution and the technologies and methods of organization that it brought while others were unable to do so.

NATIONS FAIL TODAY because their extractive economic institutions do not create the incentives needed for people to save, invest, and innovate.

The institutional problems mean that foreign aid will be ineffective, as it will be plundered and is unlikely to be delivered where it is supposed to go

Yes, much of it is wasted. But if out of every dollar given to aid, ten cents makes it to the poorest people in the world, that is ten cents more than they had before to alleviate the most abject poverty, and it might still be better than nothing.

One thought on “Why nations fail”