3 hours before today’s match, I came across an article of NY Times called “Neymar’s Injury Sidelines Effort to End World Cup Racism” which talks about the racism in Brazil. 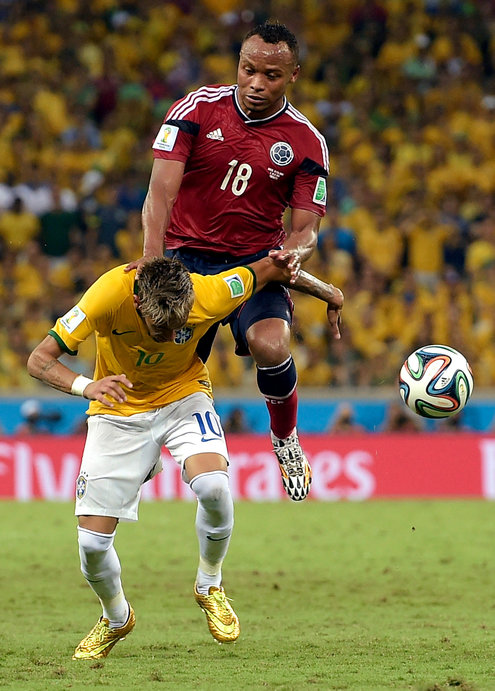 According to this, while more than half of Brazilian (about 200 million) define themselves as black or of mixed race, giving Brazil more people of African descent than any country beyond the borders of Africa, the top ranks of government and the private sector remain dominated by whites.

Brazil has recently enacted sweeping affirmative action laws aimed at increasing enrollment of students of African descent in public universities and the hiring of black or mixed-race candidates for coveted public jobs. Brazil also has legislation explicitly prohibiting racial or ethnic discrimination. In addition, it’s worth mentioning that in Latin America, both Mexico and Brazil are the icons which promote the inclusive education at national levels.

But as is always the case, the theories (laws) and the practices (realities) are different, and the Colombian player was strongly criticized by Brazilian people, not only for his action but also for his race.

Again, it was the article written before the Brazilian tragic loss in home country. I am a little bit afraid something terrible might happen in this regard.

So affirmative action, it is often discussed as a controversial issue. Theoretically it will favor specific population (mainly black people) for making up for the discriminative past as well as promoting diversity at Universities or works. For example, if student A (white) and student B (black) have the same test score at the university entrance exam, affirmative action allows the latter to enter, because his ancestors had suffered from severe discrimination. Although that discrimination is worth compensating, it does not mean student A (white) did something bad to the student B (black).

If you do something terrible, can it burden your grandson? Although it’s not that simple, I still don’t know if it’s the right “action” to take.

As a matter of fact, there are many kinds of affirmative action in favor of black people, women, and even people with disabilities. I think trying to care the population which was historically discriminated is a great track, but it has to provide not only an entrance but also creating a society without any kind of discrimination in which everybody can live with dignity.

The loss of Brazil was tragic, I just hope nothing will happen to the Colombian player and black people. (Personally I find his foul less intentional than biting somebody…)