We tend to think that the opposite of “Success” is “Failure”. But is it so black and white?
Please take a look at the following three quotes to think about the question:

“I have not failed. I’ve just found 10000 ways that won’t work.”ーThomas Edison
“We learn from failure, not from success.”ーBram Stoker (author of Dracula)
“If you’re not prepared to be wrong, you’ll never come up with anything original.”ーKen Robinson (educator)

I think most of us, if not everyone, can agree with those quotes from their own experiences.
The word “failure” sounds so negative whereas “learning” is quite positive. But those two are actually very much connected as shown in the quotes, so if we could change the way we see the failure, things might be different in a good way.

When we think about “successful people” (although the definition of success can vary), we usually see the final outcomes, not the process they went through to reach the results. But when we look at the latter (process), those people have made a lot of mistakes, which ultimately made their ways to succeed.

Regarding this, I came across an interesting article (BBC news “Viewpoint: How creativity is helped by failure“) which focuses on how countless failures came to produce great works.
To take some examples, British inventor James Dyson worked his way through 5,126 failed prototypes before coming up with a design that ultimately transformed household cleaning; and, Pixar, an animation company that has become synonymous with creativity (my favorite!) often creates more than 125,000 storyboards by the time the film is actually delivered. The president of Pixar, Ed Catmull, even said that “Early on, all of our movies suck” (I can’t wait to see new Pixar movie on dinosaur!).

Besides, the article introduces an interesting art exhibition in which the curator asked a group of 50 prestigious designers and illustrators to send in their mess-ups, rough drafts and preliminary sketches. I find this very intriguing.

Of course, since failure/learning varies from small scale non-critical one to large scale one, it is difficult to generalize failure.
According to Mind/shift’s article (Why Understanding These Four Types of Mistakes Can Help Us Learn), there are 4 different types of mistakes. 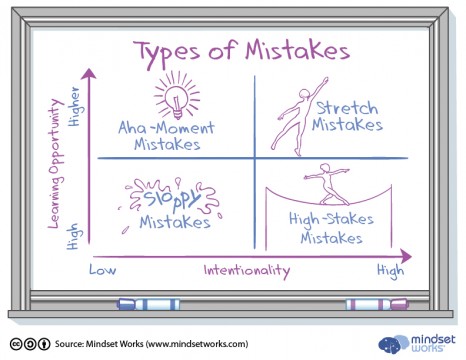 In short , despite the difference in mistakes, the following points are something common in terms of achieving all sort of thing, be it work, art, sports, language acquisition or hobby.

What we can do at an individual level is to embrace the fact that failure is not negative thing, but it is a key to learning (of course you need to try your best before making mistakes).

The opposite of success is not necessarily failure, and rather, the latter is the engine to reach the former. Therefore, we can start thinking that there exist only success and leaning, instead of success and failure.

Thanks for reading. If you like, please subscribe to the newsletter (from the right side of the blog page)