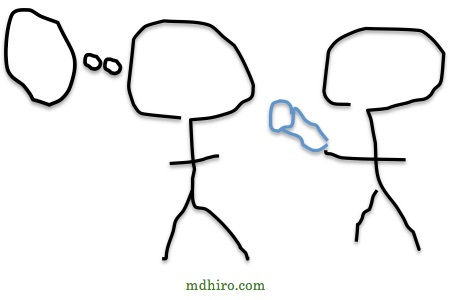 In June, I had an interview with a Japanese newspaper in Mongolia.
The main focus was to capture what I am doing in Mongolia as well as my journey up until now.

Having read the previous interviews of this newspaper (a Nobel prize winner, the CEO of the biggest bank in Mongolia, etc.), I was not sure if I was the right fit, but the chief editor said as long as it can deliver something worth sharing, it would be fine. After the publication, I received some positive feedback from people I know as well as strangers, so I hope it was ok.

The interview took more than 3 hours, and it was a fluid conversation rather than serious Q&A. It was an enjoyable experience for me.

This time, I learned that:
Through the interview, I could reflect on my past and present, and realized that currently I am not challenging myself as much as I wanted to. In that sense, this interview was very meaningful for me to move forward. 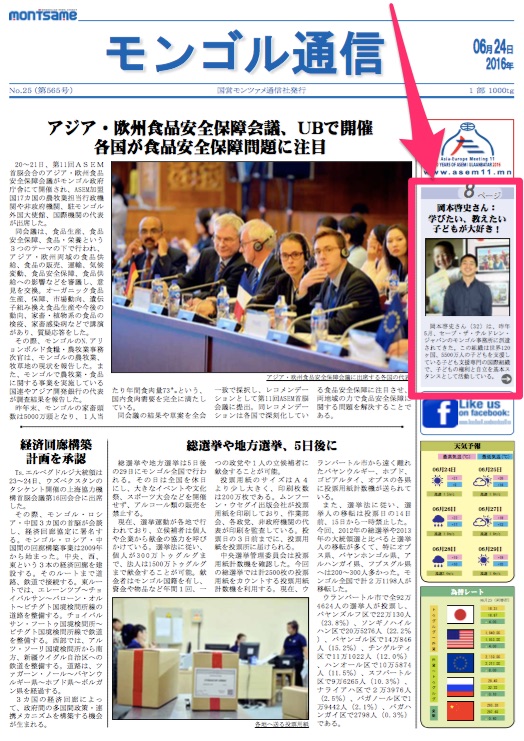 In short, he is an international “energetic man” who currently explores Mongolia. He seems to be very focused, but still stays calm. Last May, Hiroshi Okamoto (32) came to Save the Children Japan Mongolian office. This international organization promotes children’s rights and supports around 55 million children in 120 countries. We interviewed Mr. Okamoto who had just come back from a field trip fot the project to support children affected by the winter disaster “Dzud”.

Q. Where in Mongolia and what do you do?
From April to June, in western Mongolia (Arkhangai and Uvurkhangai), we distributed coal for heating and other non-food items, and provided psychological and education support. We trained the provincial and school representatives. Seeing children’s smiles gives us a sense of achievement.

Q. This is an emergency project, right? So what do you usually do beside this?
I am in charge of an education project focusing on the ger districts (slums) of Ulaanbaatar city. We conduct training to enhance skills and strengthen collaboration among schools, local communities, teachers and parents.

Q. Could you share your paths and how you ended up in Mongolia?
I am from Osaka. I started volunteering in high school. At Kobe University, I majored in Education and obtained 5 educational licenses. I really liked learning (laugh). I also had 8 part-time jobs at the same time, but still tried to attend classes, and ended up getting 210 credits (you need around 120 credits to graduate). I also was a back-packer and into dancing. I just let my curiosity lead me and tried to do as many things as I wanted to.
I really liked teaching and children, so I decided to be a teacher.

Q. But you didn’t choose that career?
To become a better teacher and improve myself, I went to New York to study acting. I believed that “a good teacher is a good actor, and that the classroom is a stage”. But along the way, I was attracted by the energy of New York. I originally planned to stay there for 1 year, but ended up living there for 5 and a half years. I improved my acting, English and Spanish.
Along the way, I had a life turning point.

Q. What is the turning point?
An encounter with a Mexican friend. He had left his country and family (wife and 2 daughters) and worked illegally for more than 10 years to send money to his family. He was very gentle, fun to be around and energetic. He never complained about anything, and always read newspapers. One day, I asked him, “If you could have only one wish, what would it be?”
He said “I would like to go back to elementary school to study. I dropped out when I was in the 3rd grade, and was forced to work. Now that I have my daughters, I know the importance of education”.
It was the lightning moment and his words in Spanish shocked me. That night, while the lightning in me was still alive, I decided to do something for someone like him.
“What about doing educational development in the United Nations?”
Then I started to study to enroll in graduate school. At the same time, I started working at a  Japanese school. I taught for 3 years while I was studying International Education at New York University. Working and studying at the same time was very tough, but it was the children who supported me in being able to manage all these endeavors.

Q. So you had great encounters with children at the Japanese school, right?
In addition to the subjects like Japanese, Math and Environment Studies, I taught Gymnastics, Dance, Swimming, Soccer and Skiing. In my literature class, with my acting experience, I combined acting and literature learning. Children divided stories (e.g. a Mongolian folk story) into paragraphs and created their acting movements based on them, and they usually went beyond the teacher’s expectation.
Even those children who had struggled with Japanese could express the story, which was a great moment for me as a teacher and a person.
I liked teaching so much, but I thought I had to focus on what I thought I had to do, instead of doing what I liked to do, so I decided to go for international educational development.

Q. What happened then?
I worked at UNESCO Chile, where I did an internship beforehand for my Masters. Half a year later, I started working at the Japanese Embassy in Santiago, Chile.

Q. Why did you come to Mongolia?
From the other side of the planet (Chile), I found a job vacancy at Save the Children to support education in Mongolia. I applied, was offered the job, and I came to Mongolia to be the manager of this 3 year-long project.

Q. How is Mongolian life?
When I came here, the sun was still shining at 10:00 pm, which surprised and impressed me.
I can just manage to use Mongolian for shopping and other basic stuff, which is a bit frustrating. I am also studying French, hoping that someday I will work in a French-speaking country in Africa. Mongolian is more difficult for me.

Q. So you are already planning life after Mongolia?
Since life is short, I would like to do everything I want to do. I have a rough plan until I am 90 years old in good health and mentally alert (laugh). I am interested in any kind of learning.

Q. In addition to mastering several languages, what else do you want to do?
Cooking, writing and illustrating picture books, playing music, dancing, opening an organic restaurant. I am also interested in learning Khoomii (Mongolian traditional singing method). Everything I find interesting (laugh).

Q. What are you currently into?
I would say writing my blog. The main concept is “leaning”, and the themes vary from cooking, movies, music, education to hip hop, and there are 30 themes. After work , I study languages, and sometimes write my blog. “mdhiro.com” is my address, so please take a look. I write in 3 languagesーJapanese, Spanish and English. I have a lot to improve.

Wherever and whatever I will be doing, I’d like to continue to work for children in some way, since I can learn many things from them and I just like them.

* It is quite rare to find someone as active as him. He is full of energy and without hesitation. To have a better picture of how he works, we interviewed the office director:
He is a curious person and likes to challenge himself. With responsibility, he tries to go beyond expectation. He speaks English and Spanish fluently, and tries to use Mongolian with others. He can dance very well, and gets attention every where he goes. He also is conscious about what he eats and his health, and brings his lunch everyday. I can see that he cares about children by the kind way he treats them.

In the future, Mr. Okamoto will fly away from Mongolia to other parts of the world. We believe he is capable of doing so.

2 thoughts on “Finding Myself through Interview”