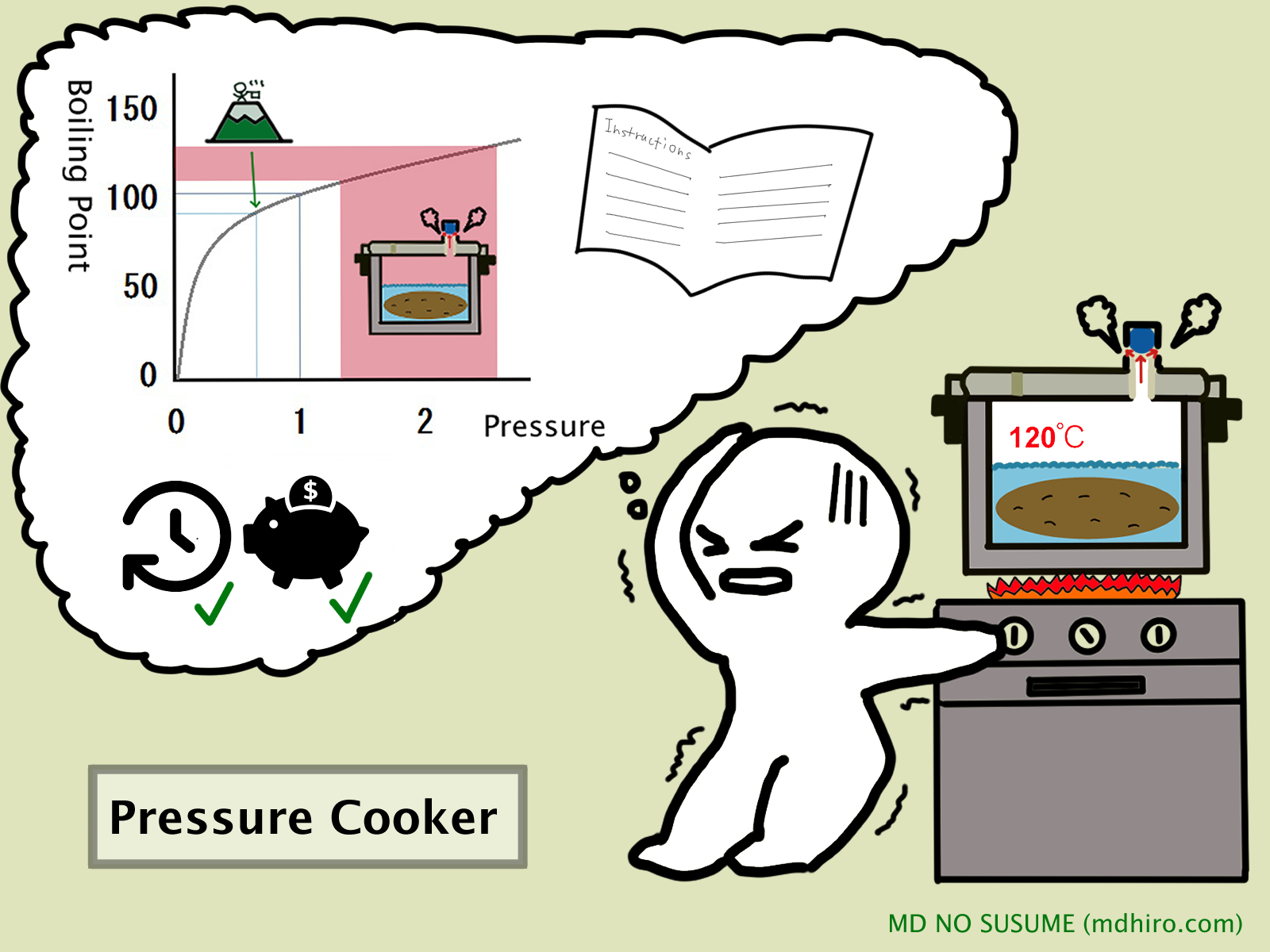 It is something most of us know, and its sound reminds us of the locomotive, and despite familiarity, many people do not dear to get close to it.

It is a Pressure cooker.

Although everyone knows in some way that it is useful, I imagine many people do not know when and how to use it, want to use it because it’s dangerous, or do not find any added value over normal pots which are cheaper and lighter (I was exactly like that until 2 weeks ago).

Therefore, in this entry, with specific experience of my first ever trial of using pressure cooker in Africa, I would like to share how to use it and how it functions, as well as some learning out of it.

Why did I want to buy a pressure cooker although it is more expensive and heavier (against my general policy) than a normal pot, especially in Africa (Mauritania)?

Well, it is due mainly to cooking of Natto in Africa (for more detail, please see Arigato NattoーHow to make Natto at Home Even in Africa). Given that it was the first time and I had so much adrenaline in myself, I did not care about spending 8 hours of cooking soy beans. If I want to continue this Natto making, however, (which I really do), it is not sustainable for the sake of time and economic reason (as I use small gas pomp for the stove). Therefore I was very much interested in the use of pressure cooker, which I heard could save time and money around 8 times.

The importance of knowing what you want

If you know what you want, it is much easier to find it, even in the big supermarket or flee market. And it was so true, as 1 week after I made Natto at home, I found a pressure cooker in the supermarket of Mauritania! As I had been there often before, I felt like I found a treasure. And this can be applied to a life in general:

If you know what you need and want, you tend to obtain it more easily  (MD NO SUSUME)

Looking around, I realized that the whole line of supermarket was full of pressure cookers. In terms of size, it varied from “how small it is!” to “that big?”. and so did the price. As my objective was Natto making, I chose relatively small one (5L). The price tag said
“1500 MRU (42 USD)”.

By comparing those, I could not find much difference thereof, so I just asked an employee, who just said

And looking at the instructions of 2 pots, I noticed that they were different brands (*although neither of them mentioned any brand name, the way of instructions was different), and the expensive one came with a box. Apparently, it seemed to me that the only difference was that small box, so I tried to ask other employee, who said:

That was not my point, but it did not surprise me at all, as this is the quality service here…

Anyway, I decided to buy the cheaper one. For your reference, with 700 MRU (local currency Ouguiya), two persons can have a dinner in a restaurant for foreigners, which is not necessarily cheap. That’s why I thought the quality of the pot should be descent enough. 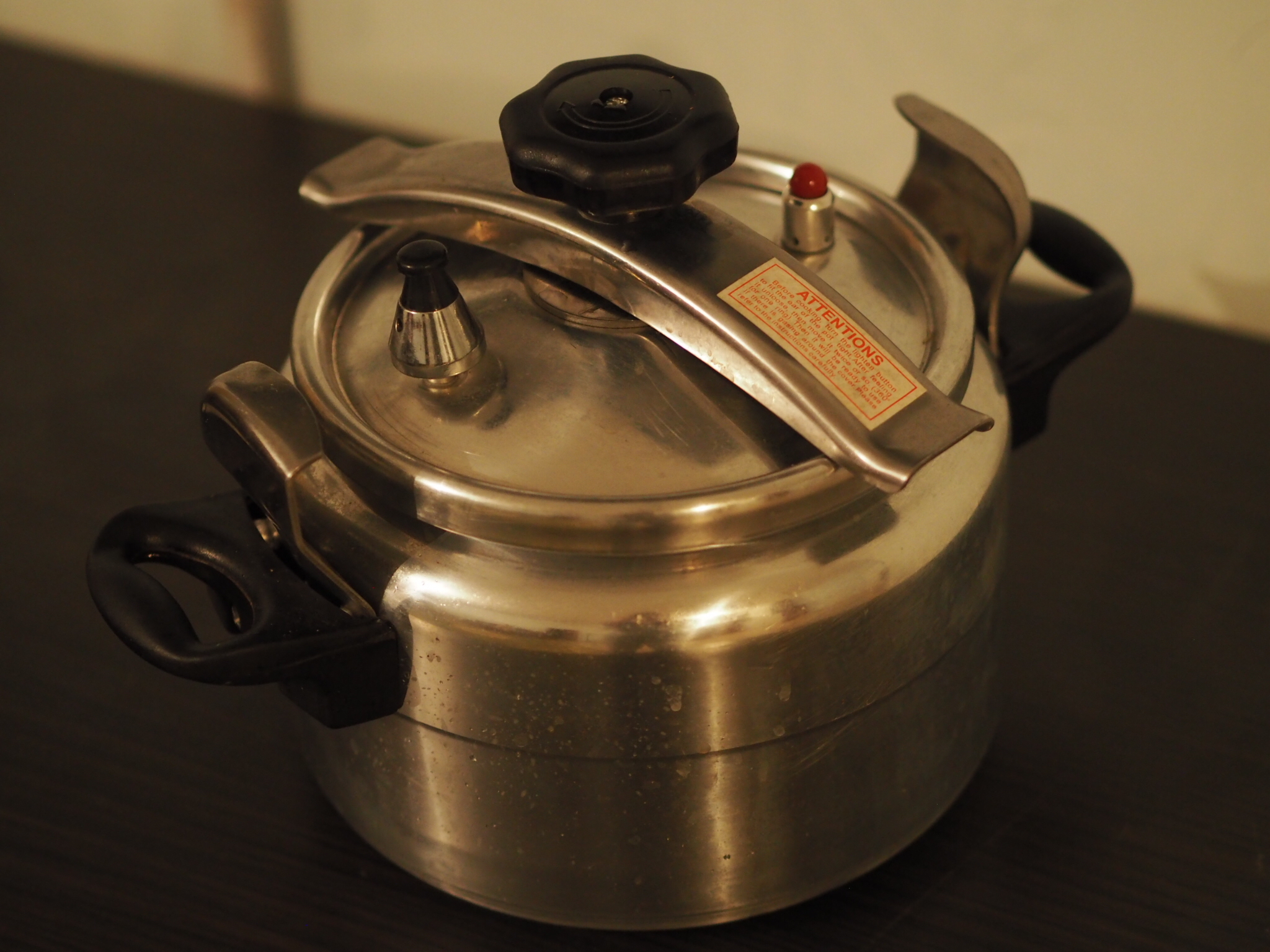 The pressure cooker (5L) I purchased in Mauritania (no brand)

How to use pressure cooker

As soon as I got home, I started reading the instruction (which was really brief), but I could not find much detail even on internet (as there is no brand). So I decided to learn how to use it generally with other brands. Honestly I was quite impressed by the diversity of brands and fancy functions (with pressure adjustment and auto-lock function). No matter how rapid products evolve in the market, of course the one I bought did not have any sophisticated function.

Simply put, here is how to use pressure cooker (in general) :

The pressure cooker is useful to cook something which takes longer than 1 hour with normal pot. You can save money and time up to 8-16 times.

But why does it make faster? How does it work? Simply put, the high pressure changes the boiling point.

As 1 image shows more than 1,000 words, let me start with the below image. 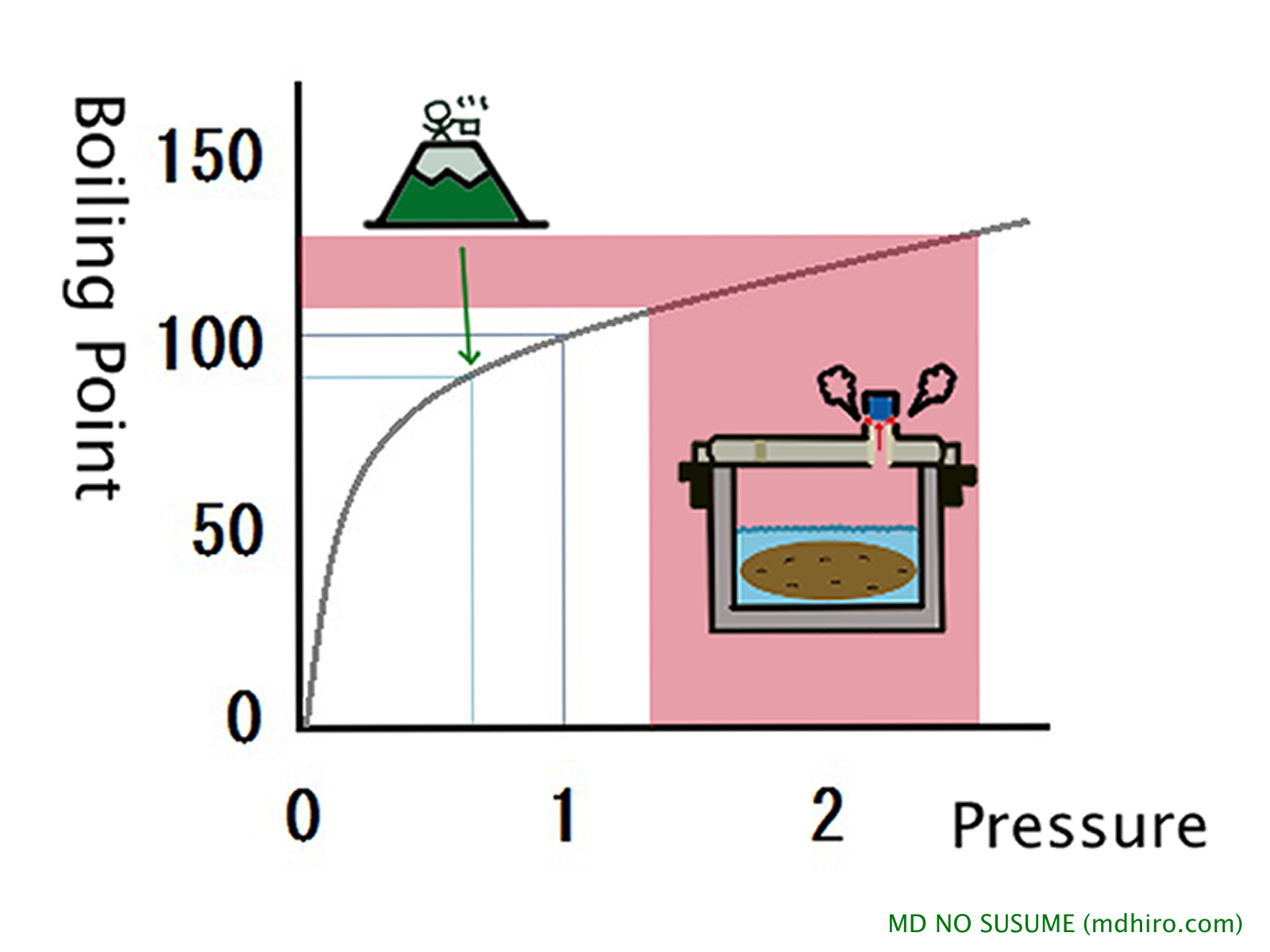 (1) Cooking in a special condition → (2) the steam won’t come out of the pot  → (3) the pressure get increased → the boiling point increases (100 ℃ → 120 ℃) ​​→ (4) it can cook with higher pressure and temperature than normal environment (if the pressure reaches certain level, the small button on the top will emit steam to maintain it) → (5) it can cook faster

In summary, the pressure change the boiling point, and the higher it gets, the faster it cooks.

For example, in the regular environment (altitude), where the pressure is 1 in the above table, the boiling point is 100℃.

However, on the top of mountain, the pressure gets lower. For example, if you are on the top of the Mt. Fuji and cook rice (pressure 0.6 and the boiling point around 90℃ ), water get evaporated faster than the adequate temperature and it will not cook well.

On the other hand, in the pressure cooker, the pressure and boiling point get higher to make quicker (the maximum pressure varies from 1.2 to 2.5)

Although the use of pressure cooker could be dangerous and actually it was used for terrorist attacks, as long as you use correctly and pay enough attention, it will not cause any problem. Anyway, it is worth trying at least once.

As mentioned above, the principal objective was Natto making, so I gave it a try to cook soy beans (soaked in the water the night before). With some some hope, fear and doubt if the process which needs 8 hours of cooking in the normal pot can be reduced to 30 minutes, I started an experiment:

Turn on the stove →1 min later, nothing happens.

Around 10 minutes later, it started making a sound “Shu Shu Shu Shuuuuuuu!” That means it has enough pressure in the pot.

And all of a sudden, however, the water started coming out of the pressure cooker!

I had no idea of what was going on, and tried to close the tap more firmly by turning the screw (with lots of fear). Although it seemed to work a little bit, water keeps coming out. So I decided to turn off the stove and empty the pressure to understand what was going (again, with fear, just like the below image) 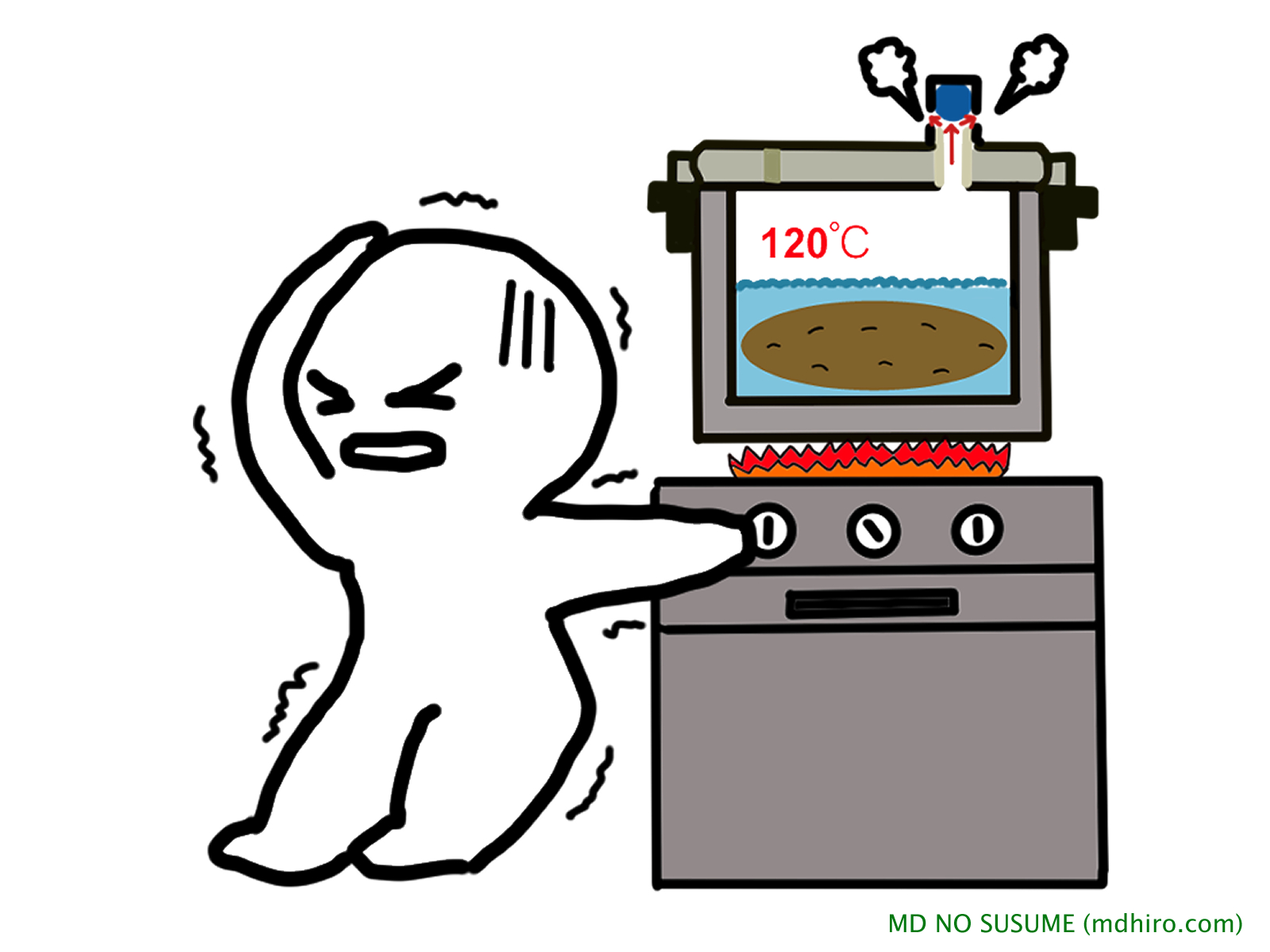 By opening the pressure cooker, I discovered that some of soy skins got stuck between the pot and tap, which made some space to let the water out. After cleaning it, I retried. And voila! this time the water behaved well, so

Through the whole process, I also found another life lesson: worrisome and risk → investigation and experiment → trial and error→success.

With the advent of technology, it is always difficult to try something unknown as there exists certain risks (in this case of pressure cooker, an explosion and/or physical damage). Thus, we have to search some information to mitigate possible risks and take appropriate measures. If that does not work out, analyze and try again.

In the same vein, many people are worried about AI (artificial intelligence) or automatic driving without person, but probably it was the similar feeling when pressure cooker came out in the market for the first time.

Pressure cooker taught me that if you are aware of what you want, you can find it easier, and doing something new always involves fear and risk, but through research and action, trial and error, you can make it.