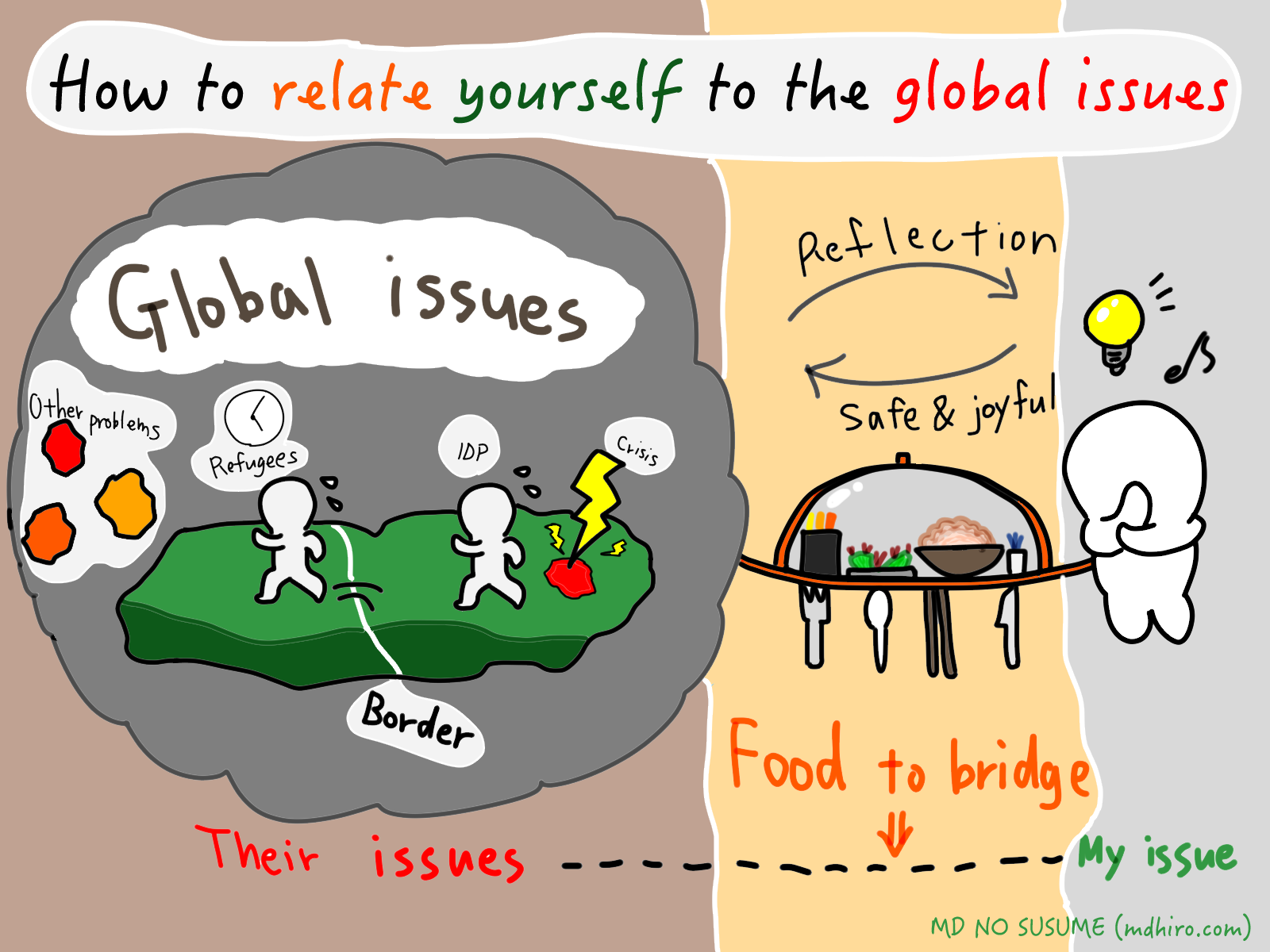 Today is just another day?

Probably “yes” to some people and “no” to some others, including specific groups.

The 20th of June is the World Refugee Day, and this year is something unique because of Ukrainian crisis which caught global attention. As is the case with most crisis, however, it’s been almost 5 months since the attack and we tend to take it for granted because we don’t relate this kind of global problem to “our own thing” as time goes by. And as you read this, there are so many things going on in the world besides the Ukrainian crisis.

As a person who has been working in global aid and refugee issue, in this post, I would like to provide some snapshots of global refugee situation to honor this day, and share some insights into how to relate global problems to our own things.

Snapshot of the global refugee situation

First of all, what is refugee?

According to the UNHCR (UN agency for refugees), Refugees are people who have fled war, violence, conflict or persecution and have crossed an international border to find safety in another country. There are other forcibly displaced people such as IDP (internally displaced people) who fled within the country, asylum seekers whose request for sanctuary has yet to be processed.

Below are some snapshot: the left side is a refugee camp in Mauritania where around 60,000 Malian refugees reside, and the right side is the fact sheet from UNHCR as of 2020. 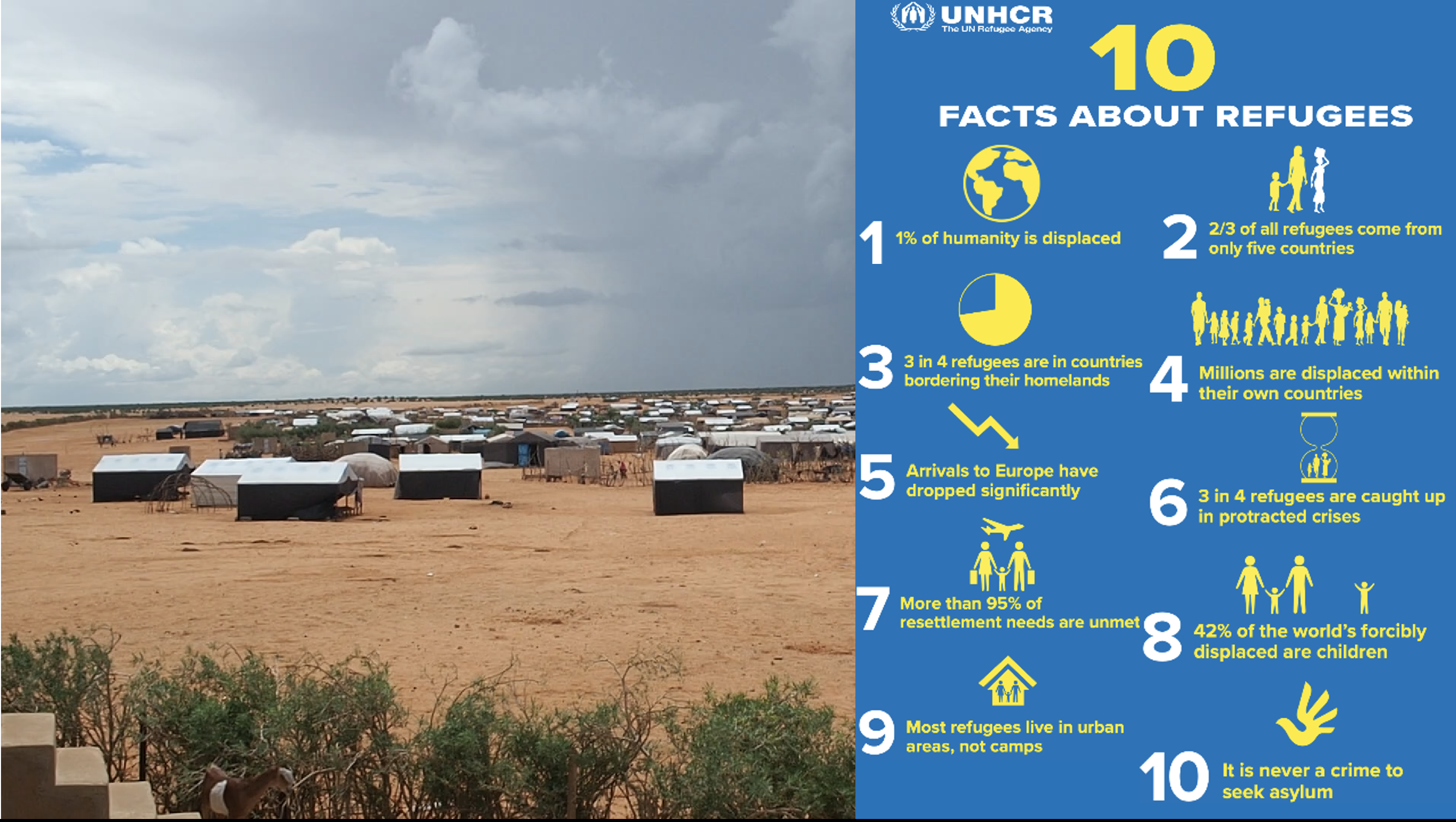 What’s remarkable is the #6 in the fact sheet.
It means that there is a global tendency that once someone becomes a refugee, most remain as protracted refugees (more than 5 consecutive years of being refugee). As of 2020, about 80% of world refugee (16 million people) are protracted refugees .

Because of continuous war, conflict, threat, you name it. People fight and kill others. Human beings are supposed to be the smartest kind yet we still don’t seem to lean the historical fact that there is no winner in the war.

As much as international communities try to bring solutions, we have to deal with the reality as well. Therefore, in 2018, the global community proposed refugee inclusion in the host countries’ national system as a part of sustainable measure while looking for other solution. In case of education, for example, this is suggesting that refugees access to public schools in the host country.

Recently, Ukrainian crisis caught global attention. It is one of the biggest/fastest refugee crisis since WWII, where more than 13 million people had to flee (5 million outside and 8 million within the country) as of beginning of June 2022. So many people stood up to support the victims, which was simply promising. Just like Syrian refugee crisis which was quite unexpected and shocking to the world, this Ukrainian case was something the world didn’t expect.
Syrian crisis remains as a decade-long crisis and unfortunately the world lost its momentum as a hot topic along time.

This implies that anything could happen anywhere at any moment, and global attention could cease quite easily. Therefore, it is quite important to consider this as our own things, instead of “none of my business”

Example of Complexity of refugee situation

What’s complicated about refugee crisis is that many host countries are developing countries. It means while they struggle to look after their own citizens, others come in. And now international communities are proposing refugee inclusion in the host country system, be it health, education or social welfare.

Finding a balance between refugee and host communities are critical for social cohesion. When I worked for Malian refugees in Mauritania, I met a Mayer in the host community, who was already stressed out since international communities supported only refugee camp, skipping their villages to go directly to the camp to provide support. I still remember when he showed mixed feeling by saying this:

We do want to support refugees as we are all brothers and sisters. But we are poor too. What we receive from international communities? Oh, just some dusts when their cars pass our village to the refugee camp.

Those refugees cannot safely return to their country soon. They stay in the host community who are frustrated with long-term refugee crisis despite the good will to receive them. Thus supporting both was part of durable solution, and we decided to work on it.

3 years ago today (World Refugee Day), I conducted multiple expression workshop for both Malian refugee camp and host community in Mauritania. Youth groups could choose among different activities to express themselves (essay, drawing, theater, dance, rap, music, etc.). The idea was to show that everyone is different and there are many different ways to express own feeling/emotion, and we learn many different skills through relevant and participatory activities.

I had an honor to teach dance workshop (show below photo). After the session, they gave me positive feedback.

I had never experienced such a joyful and educational activity!

There were some impactful stories during the workshop and I must admit that I learned more than them through this opportunity, and this World Refugee Day became something unforgettable to me. 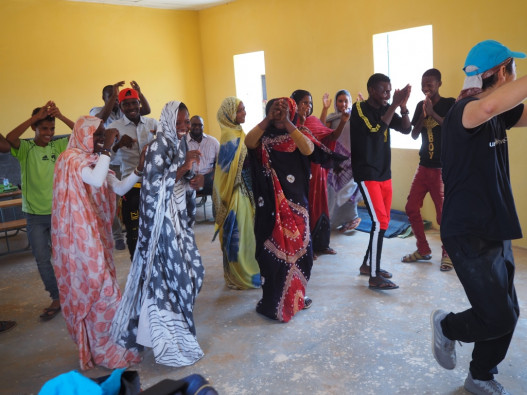 How to relate global problems as own thing

In this entry, I showed some snapshot and complexity on the refugee crisis.

In this entry, I also showed some examples to support refugees.

However, it is not enough to relate ourselves to the global problems.

Even if I had personal attachment with refugees, it is yet difficult for me to remain connected mentally as we need constant reminder and connection to avoid indifference. Even those with strong will to support the marginalized population, it is difficult to stay related. Time goes by. We have our own life. News about global problem goes on but they capture new events. We gradually forget or care less as those are not our own thing. We lose emotional attachment.

On-going Ukrainian crisis proved that so many people want to do something good for others. But we need something that connect us and them, so that “their issues” become “our issue”. If everyone in the world relates global problem to our own, I believe we take action and change something to make a better world. But wars and conflicts continue as we don’t relate to them for long. We lack of emotional attachment.

Lengthy reports published by United Nations on the topic might not be read by many people. Even if they do, it is perceived as a fact and it is unlikely that we feel emotional attachment, the key source of feeling connected to take actions.

So what’s the solution?

One of my suggestions to feel emotionally connected to global issues is the food.

Yes, food that you eat every day (if you are fortunate enough to do so). We all have to eat to survive. When we eat, people gather, chat, laugh and enjoy. The food represents its culture. If we eat Ukrainian food and learn their culture tonight, probably when we hear their news tomorrow, maybe we feel differently and perhaps do something. Why? Because we became related to them through food.

What if you eat food from Syria, Afganistan, Venezuela today?

In Denmark, two months after the Ukrainian attack, I met one Ukrainian refugee and we became friends and talked about food in Denmark, Ukraine and Japan. My new friend told me something like below that reconfirmed that foods can be a bridge to connect us and others:

Writing this entry made me hungry. What do I want to eat today? Maybe Ukrainian foods (they definitely look yummy!) 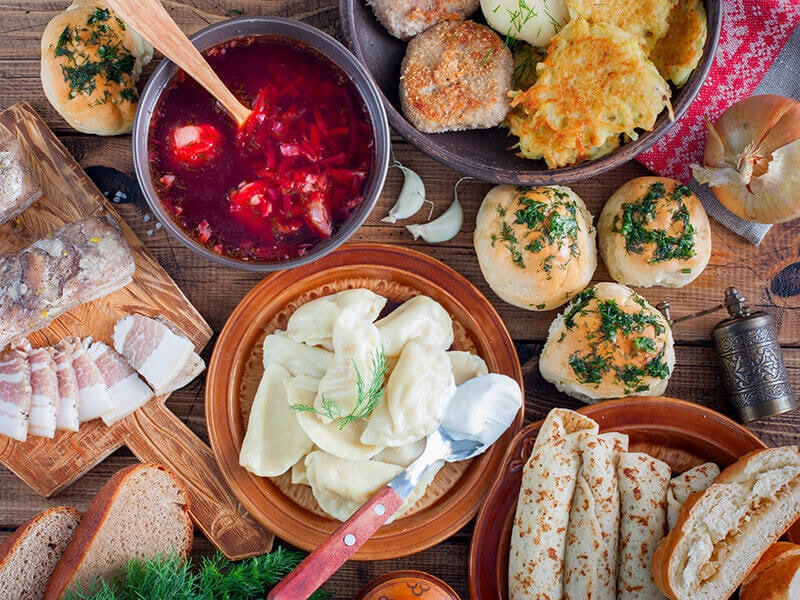 Global problems including refugee crisis are complex and easy to forget through people’s indifference in the long run, and introducing food could be one way to relate ourselves to global incidents and learn about oursevels.

Thank you for reading this article. If you like it, please don’t forget to subscribe before your leave. If you have any comments/questions, please feel free to do so. Have great learning!