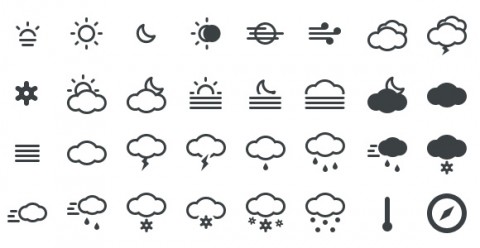 Finally, the famous Mongolian winter has come! It seems that Ulaanbaatar is the coldest capital city in the world.

Since I came to Mongolia from Chile, the other side of the planet, I started checking the weather forecast frequently. As the above image shows, there are many types of weather (and it is good topic to talk about for someone like me who does’t know the local language so much). However, there is one thing that those symbols cannot capture so much, which is the temperature. Of course, the snow mark can somehow show that it would be cold, but the Mongolian winter’s temperature (minus 20-30℃!) cannot be shown with any symbol.

I was actually nervous and at the same time excited to feel the extreme weather, since it was the first time in my life to live in such a cold place (and I don’t think I would experience this so many times in the future), so I would like to share how it feels.

First of all, just like a kid who sees the impactful thing for the first time, I was very excited when I saw the image below with my cell phone, minus 31 ℃ !! 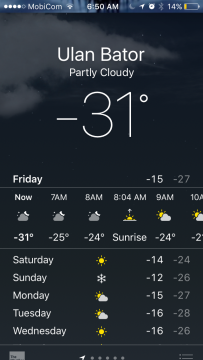 In short, however, you don’t feel as extreme as it sounds like, as long as you wear warm cloths, gloves, boots and hat. But there are 3 things that I thought were quite unique to the clod weather, which I call 3 “i”.

1. “i”Phone turns off automatically
So far, my iPhone turned off by itself several times when I was outside, mainly because of the extreme weather, which had never happened before.

2. “eye”lashes freeze
The only part of my body exposed to outside air are my eyes., and you can actually feel that your eyelashes are getting harder and freezing, which is quite an interesting experience.

3. “i”solation from outside
Due to the clod weather, tend to stay inside, so that it obviously isolates me from the outside world.

Today, however, despite the isolation effect mention, I managed to go out to see a Snoopy movie. Actually, it was the first time in my life to see the Snoopy movie, and I learned a lot about each character (I thought Snoopy could speak).

Although the history per se was not entertaining to me, personally I received 2 important messages: appreciation towards the change of weather (kids enjoying the snow) and the importance of not giving up (Charlie Brown, who ends up failing to everything but still keeps trying)

In short, from Mongolian cold weather and this Snoopy movie, I learned that

Although you can even get used to an extreme coldness, the weather is a good reminder to feel the change, which allows you to be grateful for every day.

3 thoughts on “Learning from Extreme Coldness”