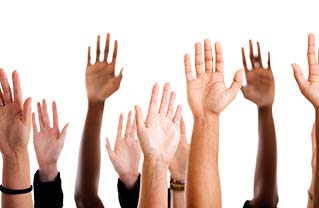 This is actually what happened in my classroom.

Me: “Ok, let’s put it this way. You can be uncertain, you can be wrong, but who have any tiny idea on this question?”
Those who raised their hands…..22 out of 22

Today, in relation to this, I will talk about the article on Health project (NY times)
It’s called “learning from failure”

[Summary] Health program which had worked in rural area in Bolivia, Nepal and India, had failed in Mumbai, urban area of India. [Why failed] ・ the community-based program didn’t work in the urban area(e.g., in the city slums of Mumbai, mothers were hesitant to depend on neighbors who live a block away)
・ It’s harder to measure in urban area than in rural area.
・ Much of the global health boom since the 1990s has focused on rural areas; far less work has been done on urban programs in part the situation is difficult to manage. [Approaches after the failure] In order to succeed in the future, researchers admitted their failure by submitting detailed report – “I failed report.” The problem here, however, is not about the failure. It’s about other policy makers’ attitude toward the future.
The risk is that too few people will follow, because they have to deal with “what will be working then” strategy. Instead, they tend to work on success-based program even though it does not meet the relevancy as if they bury failures.
Obama’s new focus on aid community also pressure organizations for positive results
, which unable them to take a risk.
Of course evidence-based project is important to look at, but we also need the attitude to explore for the future which will change over the time.
What’s important is trying to admit the mistakes and try to do better next time.
First we need to accept the fact we can make a mistake (of course, classrooms and projects have different scales).

“You can be uncertain, you can be wrong, but who have any tiny idea on this question?”
I suppose we might need this kind of attitude.
I don’t think it would promote learning if you raise your hand only when you are certain about the answer. It might be the scoiety that creates this environment.

I always try to say and question things even if I make errors.
Since there are many things that I don’t know, I make a lot fo mistakes. Then I learn.
Failure/ mistake=>correction=> effort to fix

4 thoughts on “Learning from Failure”