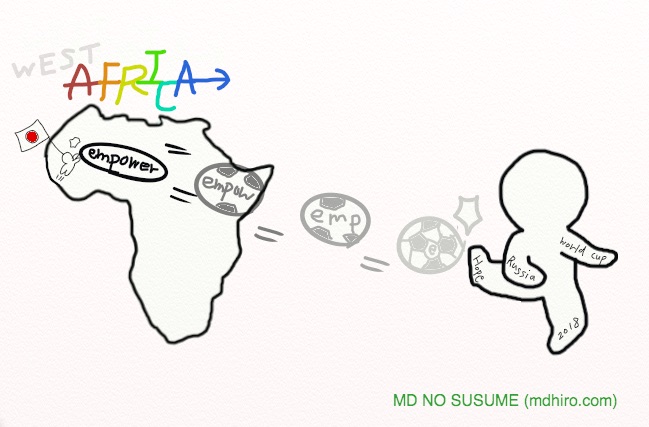 It’s been 12th year since I left Japan, and the more or less I am used to living in other countries.  Having said that, the first 3 months in Mauritania was quite tough (as you can see the detail in the previous blog entries:
Mauritania 1ーLife turning point
Mauritania 2ーRamadan and Life cycle
Mauritania 3ーIs it a private taxi or what

Mauritanie 1, Mauritanie 2, Mauritanie 3 ). Just to show one indicator, within 3 months, I already lost 4 kg and sometimes felt a bit down.

Yes, but the experience of being saved is still valid, so I would just continue to leave passionate feeling here.

As mentioned previously, entertainment in Mauritania is really scarce, so in the difficult time (without car, friend, knowing what to expect, etc.), at least I had something to do: watch the football match (soccer for US audience). As local people also love it, it was also a nice topic to talk about (in addition to family and weather, etc.).

I believe it is fair to say that there was one team which surprised the world with unexpected great performance: Japanーalso known as Samurai blue（侍ブルー）.

Unlike other major football countries, they don’t have speed nor physical strength, but they showed strong will of never giving up and continued to run.

As a small Samurai, I was really moved and proud of being Japanese, especially when I went through difficult time as a newcomer in the country of West Africa.

In other words, the world cup saved a Japanese in West Africa!

In fact. there was another surprising team which impressed the world (actually much more than Japan I would say): Croatia, the second strongest team in the world as of now.

At first, when I saw their name as one of the best 16 teams, I thought it was a matter of chance. Little by little, however, I realized they were really strong, first and the most importantly they never gave up (like Japan!). That’s also why I really wanted them to win this world cup to show the world that we can make it if we try with efforts.

For example, the 2nd goal of Croatia made by Mario Mandzukic at the final match was such an impressive one, especially when everyone thought France was going to win without any issue. He kept running and didn’t miss the opportunity of the mistake French goal keeper showed for a moment. In fact, it was him who touched the ball with his hand which made penalty kick (after which France took a lead). So it was him who felt responsible for the loss, so at least he showed that he will never give up. .

In addition, the captain of Croatia, Luca Modrig contributed to empower the world by showing someone with physical disadvantage with such a short height could play well among other tall players (in fact, he played more than well, as he was selected as the best player of this world cup!)

What is even more interesting is that he was previously a refugee who somehow overcame the difficult time of life. After losing the game to France he said “they are celebrating, but we will keep our heads up. When the emotions calm down, we can analyze more clearly.”

Another Japanese empowered by the world cup

On the other hand, there was another Japanese living in Dakar (very close to Mauritania) who was empowered by this festival, through rap. He is an owner of Japanese guesthouse. When I was in Dakar for my mission, I took one day off to get to know about Dakar and I stayed one night at that guesthouse. As an educator from Japan who promotes hip hop, the existence of  other Japanese was quite encouraging to me.