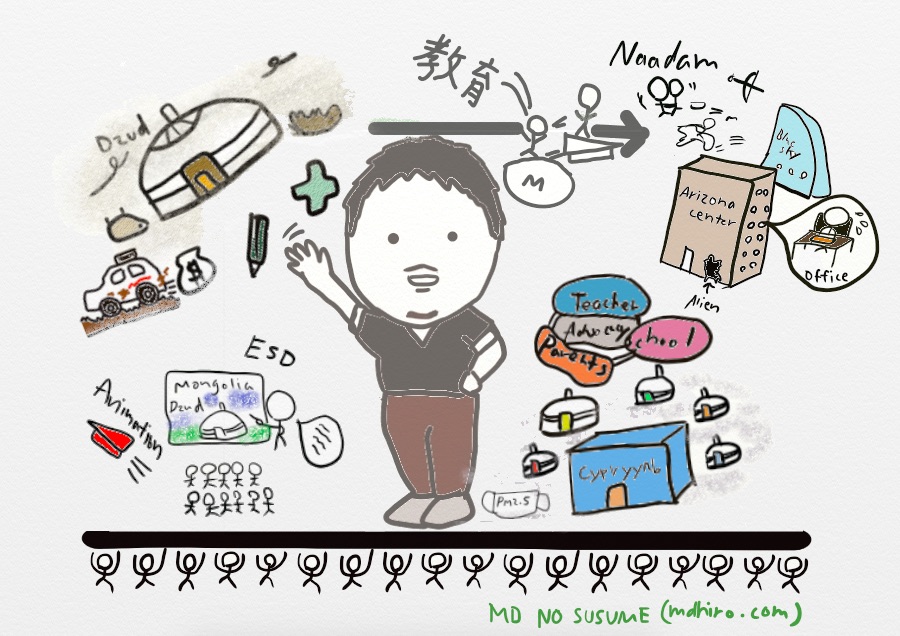 Update: This post is the last and 5th part of Mongolian series. Please check part 1, part 2, part 3. and part 4

In this, I would like to describe about the culture and nomadic life which are significant parts of Mongolia, as well as education which allowed me to stay in this country, and lastly finish with big thanks.

First of all, speaking of Mongolian characteristique, I observed that it could be divided into the following three parts:：

1 and 2 of UB hold almost half the population (1.5 out of 3 million). Please look at the world map (north of China) and you can see the huge country. With only 3 million habitants makes this country one of the least dense counties in the world. In addition, as the half the population resides in UB, the another 1.5 million is dispersed in this gigantic land.

I cannot speak of whole Mongolian culture, but if I try to summarize what I observed and heard, I would say that nomadic life is the center of Mongolian culture and what makes it very different from others. Let me mention some of them (certain subjectivity cannot be avoided).
Nomade

The nomadic people generally move all year around (not every single day but by season or depending on available grass).

As I already mentioend about the Mongolian food in the previously, I would not repet here, but in general nomadic people eat meat and drink milk of their animals so they don’t need to carry much cash. For modernized people including me whose work and life are affected by internet connection, it might be quite hard to grasp their life style (although some nomadic famillies have TV and Smartphone with solar panel).

The traditional cloth is called Dale which has fur inside and colorful design outside. The picture of nomadic people riding a horse with Dale on the Green land will show the simplicity, energy and elegance which attract many people including foreigners and people who grew up in UB.

As mentioned in the previous entry, horse riding is one of the Mongolian entertainment, but it is rahter their lifestyle than just an entertainment. In the nomadic familly, even small children of 5 years old can ride horse very well. However, there is a complicated problema on this: givent that the horse riding culture is embedded in Mongolian sociaty there are many competitions during festivals where small children (of primary or lower secondary school age ) are the jockeys. The problem lies in risk of falling, and although every one is aware of it, winning race will bring honor and money so many families encourage child jockey. On the other hand, child right organization and its promoter continue to advocate the end of child horse race against the tradition. I myself had some chances to discuss with child horse riders who said that although they are aware and scared of falling, they are used to riding and winning race is their pleasure as well. So it is quite contraversial.

Except such a problema the Mongolian festival is fun, especially the anual festival “Naadam” which takes place for 3 days during national holidays in July. Pretty similar things happen in UB and countryside which include horse riding, archery, nuckle born hitting and wrestling which happen simultaneously.

Among them, the wrestling takes so much time (it ends when someone’s hand, knee or back touch the ground), whereas Japanese Sumo wrestling has small ring with a judge who encourages to finish. Especially in the countryside, both chidlren and adults enjoy this sport, and it is also part of school activities. I was once challenged by my colleague (who was very thin and small), and although I was thinking he might get injured, I accepted. Despite his physical appearance, he was much stronger than myself and I could not believe where his power came from. At that momento, I understood why Mongolian wrestlers are so strong in Japanese sumo league.

Well, instead of continuing on Sumo, let me shift the topic to education (which includes sumo activity).

Generally speaking, Mongolian education standard is quite high. Given that it was Soviet Union country, Mongolia prioritized education. As a result, the enrolement rate (primary level) is as high as 95% for long time, and litereacy rate hit 100% (although I verified that was not the case especially in the countryside).

In the countryside school (the majority of the country terriotry), usually they have whole level of education building including primary, lower secondary and upper secondary as well as school dormitory where many nomadic familly children live. The idea of living separately from their parents at the age of 6 is quite difficlut to imagine for many peolple (myself included) who lived with parents during school life. However, it seemed to me that youth in the dormitoy who grew up and collaborated with others in the dormitory over the last years were very independent and strongs (boys and girls). Mongolian educaiton system (usually more than 1 shift in UB and countryside due to the pupil-infrastructure ration) is a little bit unique especially in countryside.

Despite some success in Mongolian education, there are of course some challenges in terms of access and quality. Regarding the enrollemnt, the last 5 % remains untackled over the last decade, as most vulnerable children including those with disabilities or extreme poverty, etc. are still unable to go to the school for multiple reasons (social, economic and politiacl reasons). On the other hand, there is always an issue of quality, especially teacher quality, many teachers are trained and used to telling knowledge only instead of interacting with students and prepare them for 21C skills (creativity, adapatability, etc.) In my opinión, it still focuses too much on memorization, especially poems. Almost every time I visit school (especially countryside) children are expected to recite poems they memorized, followed by adults’ applause. Once I had this primary school girl who came to me to recite 3-minuites-long poem. I said “excellent! By the way do you know what this poem is about?” And she said she didn’t know much about the meaning.”

Even though I don’t think there is disadvantage of memorization of poems by itself, I still ask myself the relevance of it, as educators are expected to facilitate how to learn and equip 21C skills for unexpected future within limited time, in stead of using time for something like memorization of which children don’t even understand.

The answer to the above issue will be gained by chidlren, educators and policy makers of Mongolia in the future.

The menace of nature

In terms of nomadic population (more than 30%) and their children living in dormitory, there is a potential risk caused by hazard.

The Mongolian nature is without doubt outstanding, as it shows perfect blue sky and eternal green land in the summer, and shining blue sky and magnificent white ground in the winter. If animals join in this landscape, there is nothing more you might need, so every time I went to field trip (8-10 hours for one way), I never got bored of it.

However, this beautiful nature can cause a great risk, which is called “Dzud”. This is a disaster unique to Mongolian winter consisting extreme coldness and thick snow. Although Mongolian winter is very cold by default (-40 C), dzud winter is even more extreme, especially for animals.

Previously duzd happened every 5-10 years, but there were 2 consecutive dzud during the winter of 2015／2016 and of 2016/2017. International organizations and the government discussed also on what makes dzud and non-dzud winter, what is the trigger, how to provide assist without duplication, etc over the last 3 years of my stay.

Simply put in terms of what dzud and the negative cycle of it are (please note that it is quite complicated and there are several exception cases):

①Drought makes grassess scarse in the summer→②In the winter animmals lack food and get weaker beacuse of extreme coldness→③The animals (main source of income of nomade) start dying→④Nomadic familly lose source of living and food→⑤It affects children’s lives and education→⑥To look for new job opportunity, some nomadic familly move to UB ger district (slum village)→⑦They might not get job in the difficult envrionement and burn fuel which becomes a cause of seriosu pollution (in the winter, the pollution level gets worse than Beijing and New Delhi according to WHO).

My work dealet with providing assistance and advocating on the above prblem⑤, which lacked attention even among other international organizations, government and even herders themselves, which was worth doing. Overall, work of international NGO I was involved with was fullfiling, being able to move with light footwork but at the same time advocate and influence policy makers through projects which were planned, designed and implemented by ourselves. Of coruse without support of staff and supervisor, it would have been imposible to finish the missions successfully.

Thanks to education, I could put my feet on Mongolian land, got to know its culture and peopl. After 3 years, it was again education which made me decide that it was time to move on to the next stage.

As a profesional expat, I had to collaborate with local staff and provide input as a foreigner. Although at certain level it is posible to influence with external experience and capacity, I believe that it is local people with knowledge of the culture and language who have been pushing things forward, and it has to be that way. In other words, I did my best as an expat to provide my inputs (be it good ones or bad ones), and I believe 3 years is sufficient in a way that there will be not much to add value from my part. At the same time, I started looking at another stage that caught my attention.

Honestly the life in Mongolia was quite tough. I had several problems (some drunk guys attacked me, I had my stuff including phone stollen, total stranger slapped me on the face, etc.) In any case, I learned so many things and I would like to finish this by saying this outloud:

「Mashi Bailarlar！（Thank you very much in Mongolian）」

The next stage is Africa. It is the first time, in addition it’s French speaking country, which is called Mauritania (totaly unknown world to me). Thinking that I could improve my French which I was studying by myself and know the orignes of what interest me (music, dance, human being, etc.) I am quite excited for this. Like Mongolia, I will have so many challenges, but I would do my best to say “Thank you so much” outloud on departure.