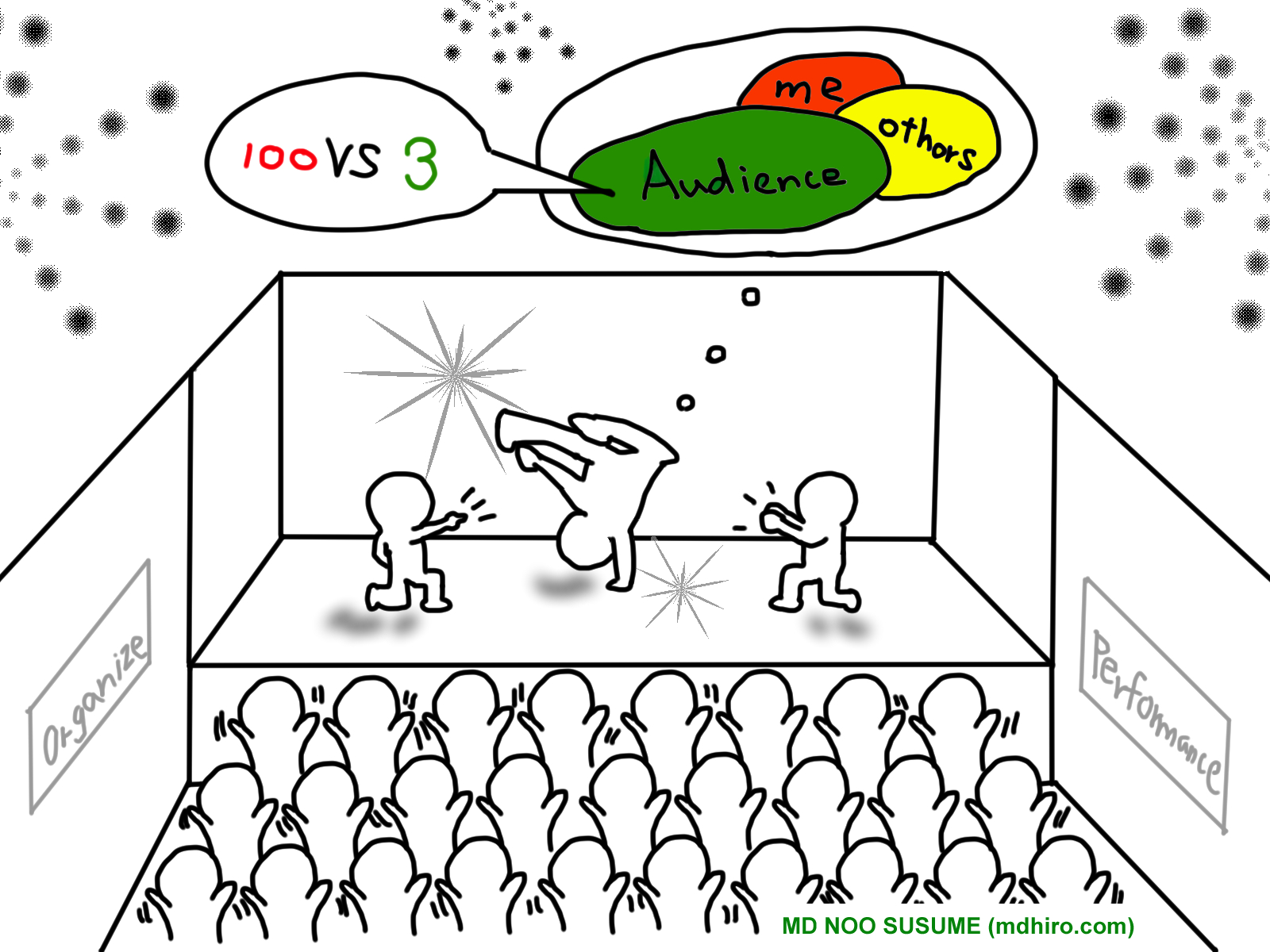 I don’t mean to brag, but it is necessary to show that I have some results behind what I am going to explain (so that you might pay attention more!).

I won at several international competitions for performance.
To name a few of 1st prize: New York Talent contest (for the final round, I mixed cooking and dancing in an unique way); Halloween contest in performaing arts’ department of American university (injured Samurai/ break dancer with hand-made costume); Asia and Pacific regional PPT presentation contest (all the slide was my drawing without texts with story telling, which got me 5,000 USD award); street dance contests in Mongolia, the US, and Japan, etc.

Am I naturally very talented on performance? No.
Am I physically gifted? Not at all (I was a fat boy without physical skill and discipline).
Have I practiced performance since I was small? No. I started dancing when I was 19.

Then how did I achieve all those?

I learned how to organize performance.

Nowadays, in any field, we need to present and perform more and more (ideas, project, sales, etc.), which means you need to stand out among other rivals. That is not easy task at all. With that in mind, in this post, I would like to share some tips on performance, mainly through my dancer’s experience.

Before digging into the detail of how, let’s take a look at what performance is.

Based on the Oxford living dictionary, the definition of performance is:
“An act of presenting a play, concert, or other form of entertainment “.

You might say “Well, I am not an artist and have nothing to do with it”.But there is another definition, which applies to most of us including non-artist:
(2) “The action or process of performing a task or function“.

So although the art is a strong key part for performance, basically it’s about action or process of presenting something, and performance skills are applicable from one area to another.

In this entry, I will talk specifically about dance performance, which can be divided by 2 types: dance show and dance battle.

(1) Dance show: Kind of dance performed for an audience. It is frequently performed on a stage (not a requirement though), and it is usually choreographed dance by a team of 2-10 people (sometimes it can be solo or more than 10), with a music each team has chosen.

(2) Dance battle: Individuals or teams battle with others. There are spontaneous battle (where people make a circle and anyone can come in to show their dance, usually without judge and award) and structured battle (with judges who decide which individual/teams win).

In a nutshell, (1) is  a choreograph which needs preparation to the same music, whereas (2) can be more improvisation as you don’t know what music will be played during the battle. Nowadays, however, some dancers mix (1) within (2), and also some dancers do the same movement for (2) no matter what the music is (which I personally don’t support although it is a personal choice).

As mentioned above, we prepare for performance regularly (be it at office work or artistic area). Generally, people with performance skills stand out among others. They have knowledge and technical skills, but they also present those better than others. With the advent of internet and youtube, we can learn knowledge and technical skills quiet easily, that means more and more people can equip those skills, so you have to have added values.

When you perform well, It gives more satisfaction to audience, which provides better result and joy of performance. Also, performance skills need to be nurtured more than ever, as it is strongly tied to the skills we need, what’s so called 21st century skills (expression, creativity, problem solving,  critical thinking, communication, etc.).

It can be the same for dance show and battle. Have you watched a dance show where someone specific intrigues your attention among other dance members? Maybe s/he uses more facial expression, tiny gesture, or something you don’t even know.

When it comes to dance battle, there are so many dancers with good skills, techniques, physical abilities, but only a handful people stand out.

What you want to show

In a dance show, what we do is to identify (1) show member, (2) what kind of show to perform (3) music, (4) who makes choreograph (5) compile all and practice. So the more people get involved in a dance show, the more interests exit, which can show diversity if it works well. But it is very easy to mess up as each member shows their interest (e.g. music and movement) without thinking about whole picture as a performance.

In a dance battle, on the other hand, you don’t have to prepare much (actually, the more you prepare, the less you improvise to the music, which makes it pretty obvious that you are not listening to music).

But both show and battle have a limitation on time. Within a limited time, you have to stand out among others. The common mistake is that you want to show as much as you want without taking one very important essence into consideration: Audience.

What audience want to see

The tricky part of putting too much interest of performers can be ego, instead of what audience want or might see. It is related to how our brain works. Let’s take a look at the number below:

What do you think about this?

The answer is this:

The number (100 and 3) itself does not represent scientific evidence. But the point here is, in many performance, performers tend to think that the more they show, the better, which is not true at all. In fact, the more things you show, the more the quality of each part diminishes, as it becomes difficult to know the main point. On the other hand, if you show 2-3 main points in the right moment, the impact of each will not diminish, and audience will remember those (as we cannot absorb so many things).

If you show 100 acrobatic movements in 3 minutes show (which I cannot do phyisically), the impact of each will diminish. On the other hand, if you include 2-3 in the right moment, audience will remember all of those (just like the cover image: the power of less!).

Depending on the audience, you can adjust what you present. So you have to analyze who audiences are, and what they like to do.

How did I learn this?
I have performed hundreds of time. But more than that, I was an audience of thousands of performance, and I have seen bad performances more than good performances, and analyzed why. And the answer was the 100 VS 3 (bad VS good).

So the important thing here is, we really need to put ourselves in the shoes of audience. The best way to do so is to be an audience, and analyze what good and bad performances are. Then you practice good elements through your own performance, and see the reaction of audience. In other words, you learn theories by being an audience, and practice by being a performer, and revisit this cycle.

Well, looking performance from the point of view of audience is key. There is also another key point you need to consider: It is also important to notice what other competitors might do.

Deciding what to do for audience is equally important as knowing what NOT to do for them.

Good performer stands out from others. In other words, if you know about others, you can prepare for performing better.

One example on the dance show case is showing something unique that others might not think of. When I decided to join a team of 12-13 people for university students dance show, we had many different interests on music and choreograph to use. What we usually had done previously was connecting 3-4 different musics and assign people to make choreograph for small parts. Although it sounds like a good team work strategy, it was not the case. As I knew that our skills were not enough to compete with other college students, I proposed to use only one music (with only drum), and make something very unique. Most of the members opposed to that idea as we had never done such a thing, but gradually, we reached an agreement, and our concept was “Japanese traditional festival”. Everyone worked harder to make something unique and memorable, and we won special prize for the contest (the comments of judges was “unforgettable show ever”)

Another example:  when I won regional university dance battle contests, I studied about other teams, most of whom turned out to be acrobatic dancers. Although I knew some acrobatic moves (we call “power move” for break dance terminologies), others were much better than mine. Therefore, I decided not to use any of them, and stick to rhythm dance with simple move (but dancing to the music, which tend to lack among acrobatic dancers). In the end, many other dancers ended up performing with similar movements (which looked similar to the audience), and I was different and won the 1st prize.

See the point? Of course, in order to adjust your performance depending on what others do, you have to be able to have different skills. For example, if your rivals are all rhythm dancers, you might want to mix with power move to stand out.

Although I kept mentioning about considering your audience, it does not mean you have to sell your soul to others and do what you don’t want to do. Do what you like, but at the same time find what audience like to see, and what your competitors might do, then organize well.

How to organize performance

Here are some of the summary on how to organize performance for both dance choreograph and battle :

I am not saying that you just need to organize performance. As a prerequisite, you need to have a basic skills and creativity, and experience in front of audience. But those recommendations can make the most use of your skills and thoughts into good wort.

This time, I specifically talked about dance show and battle, but these rules also apply to other performance, which I will touch in the following series of organization.

Performance exists because of audience, and you have to learn about them, your rivals and yourself to decide what (not) to do, practice and enjoy. In other words, you need to organize the performance to give the most impact.