Since the issue of Crimea is getting more intense given that Russia might absorb it as a part of the country, I came to think how vague the notion of the border is. It is made up by human beings, especially those with forces (winner of war)

For the last couple of days, I also had several occasions to think about what the border and territory are.
Yes, I went to Patagonia, very south of the earth.

When I was planning on this trip to Patagonia, many people asked whether I was going to Chilean side or Argentinian side, because this area belongs to those two countries. 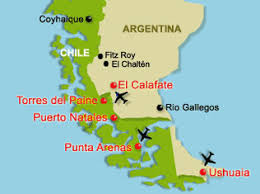 Left: Chilean side
Right: Argentinean side

For example, the Chilean side is famous for the great nature of national park “Torres del Paine (Towers of Paine)” named after the shape of the mountains.

On the other hand, Argentinian side is well-known for the glaciers called “Perito Moreno”

I had a chance to see the both side.

However, as I talked to the people who live there, I began to realize that most of them don’t think that they belong to neither Chile or Argentine. They are people of Magellan originated from long before the era of conquest. Their ancestors had their own culture, language and life.

As we know, territory is made up by human beings and it is vague.
I think the priority is people who live there and the political issue should not disturb their own culture, which often happened in our history. So is Patagonia and will be Crimea…

Anyway, Patagonia was a once-in-a-lifetime experience.
I wish I could visit more places without having to care about borders.