The Syrian case has been controversial for so long that we tend to get used to this kind of news, which is the sad but it might be the nature of natural/artificial disaster. Last time I talked about the security, and I think that Syria is no doubt one of the most insecure countries right now.

This is one of the on-going Arab spring cases. On the other hand, there are some countries in which a revolution was “supposedly” over, like Tunisia, the country which initiated the civil movements.

Wondering how it’s like in Tunisia now, I came across a NY Times’ article “Tunisian B-Boys’ Biggest Battle: Keeping Youths From Extremism“. 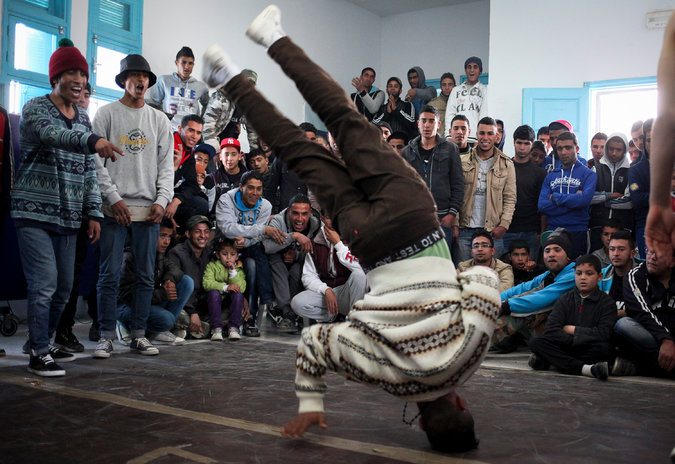 Three years ago, the fruit seller Mohamed Bouazizi set himself on fire in a protest against poverty, government corruption and indifference. The riots that followed, led by the angry working-class youths of the area, brought down President Zine el-Abidine Ben Ali and incited the revolts of the Arab Spring.

Three years on, it seems that the situation has changed little, except that the police do not break up their dancing anymore and that government youth centers sometimes lend them a room to practice.

That is, youth in conflict and complex situation seeked for an opportunity to express themselves, and the society has given the permission for youth break dancers who practice for dance battle.

That’s what I am talking about!!

Because Break dance, or Hip hop, has a strong power to give youth opportunities to express themselves and  the sense of belonging and growth.

I found a video of “Battle of the Year (an annual international break dance contest) in Tunisia. Only one team which wins at a national contest can get a ticket for the international battle.

Although the country’s representative is not sophisticated enough compared to other countries, I cannot help but see their voices. This reminds me of my college days when I practices every day trying to improve my skills and express my feeling via dance.

We are born to express and break dance is a great tool, especially in a conflict area.

To my surprise, there existed a new movie of “The Battle of the Year”. The main actor was in the TV show “Lost” and in the trailer, he said as follows:

【Trailer: Battle of the year】