I can’t count how many times I was called “Chinese”. Especially from my experience, people in Latin America―on the other side of planet where there is relatively less knowledge about Asia―tend to categorize Asian people as Chinese. I even met a few people who thought China was a continent where Japan and Korea belonged.

Since most of them have no intention to offend, however, I don’t care (I got used to it), unless there is an obvious intention like the other day: I was just walking on the street of Downtown (Centro) of Santiago, and a car just passed by, and a guy in the car looked at me in the face, then shouted:

“No, no, I am not a Chinese, nor dirty!” (And Chinese people aren’t dirty either!) That’s what I wanted to say. But I was too surprised to say a word. (That rhyme in Spanish was not so bad if it was the rap battle, though.)Just for the record, I really admire Chinese culture and people (through my Chinese friends), but I don’t like this categorization so much, since China, Korea, Japan, among others have many different things.

When it comes to the appearance, however, it is indeed tough to distinguish. I was asked many times what the physical difference between Japanese and Chinese was. After a few years of personal observation (no scientific evidence at all), I came to an conclusion:

Then I found many articles on this theme, which kind of back up that theory! Based on the most updated article, many Chinese have poor eyesight, and 86 percent of high school students in Shanghai suffer from myopia, or nearsightedness (the source of photo is this article, too).

To summarize the issue, it is mainly due to the following three factors:

Well, it sounds not so different form Japan. Actually, Japanese people have also a large percentage of people with poor eyesight, albeit a little smaller than China, and it seems that Japan is one of the top contact lens consuming countries in the world.

So it may be said that both Chinese and Japanese people tend to have poor eyesight, but the former is more likely to wear glasses than the latter. (And some Chinese girls even consider wearing glass is fissionable, and I kind of agree with it.)

Maybe in greater or smaller degree, this trend can be spread all over the world in the future because of more use of the computer and less exposure to sun light.

I also thought about genetic factor but it may not be the case at least from my family situation, because unlike my two brothers with poor eyesight, I have no eye problem for now. Maybe it’s because one has been a tech guy and the other has studied so hard in China? (Sorry my big brothers, I am Just kidding 🙂 )

So the important message here is the following:
If you want to take care of your eyesight, don’t spend too much time on study and electronic device, and go out side.

Although the political relationship between Japan and China is still controversial, I hope someday in near future, both country can get along with to help and learn from each other.

Well, let me close this entry with one of my favorite Chinese foods in Santiago, which is called “Papa-Mongo”. It’s literally a mix of French fries and Mongolian meet, but it is so good and addictive. And not surprisingly, I was asked at this restaurant an order from one of the customers (even I don’t wear glasses). 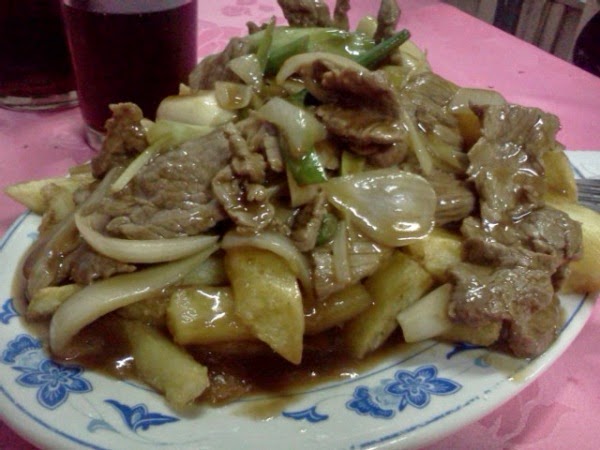 One thought on “The difference between Chinese and Japanese”