Surviving day by day for more than 4 years on a desert island, eating turtles, teaching parrots to speak, taming wild animals, helping a prisoner to train as a slave. Those are some of the highlights from the novel “Robinson Crusoe” (Daniel Defoe, 1719).

I guess If those who have read this novel have a chance to visit the Robinson Crusoe Island, many of them would get excited to be in the novel world, just like I did.

According to the people of the island, however, there is a common misunderstanding in this regard, and furthermore, there was a Japanese explorer who got involved with this island, upon which I will touch in this second entry of the Robinson Crusoe Island’s series.

Generally speaking, before traveling to a new place I usually do some research to know about the place and its culture, so I decided to read the novel for the first time in my life. Yes, I had never read that world famous novel, and probably I would not have done without this opportunity. (Since it was written about 300 years ago I could get an e-book version for free!)

Although it was pretty hard for me to read in old English, I could finish it literally right before arriving there, and with my excitement to talk about the book with people of the SAME ISLAND, my quasi-exploration was about to begin. And it did not take long until I realized my misunderstanding.

“Did you guys have to study the novel as the island’s culture? How do you relate to Robinson Crusoe from the novel?”

After asking several questions, I was a bit disappointed to know the fact that the novel was indeed inspired by the real person who survived on the island, but the novel’s scene took place somewhere in the Carib, not on this island. (And seems like it’s a common misunderstanding).

As I said on the last entry, it was a sailor named Alexander Selkirk (real person) who spent over 4 years on this Pacific Ocean’s island where there is no parrot (1704-1707), which inspired the creation of the novel (fiction) whose protagonist has been on the Caribbean island for 27 years.

Therefore, people on this island relate more to Alexander Selkirk than to the novel. In fact, there are some places which have his name: Mirador (view point) de Selkirk, Selkirk island, Selkirk stone, etc.

On the other hand, to my surprise, there was a Japanese real explorer Daisuke Takahashi (not a quasi-explorer like me) who came here a decade ago for a project of National Geographic Society in search of Selkirk. He found some evidences of Selkirk and published a book. I found out all of these from Ms. Julia, the owner of the”Residencia de Mirador” where I stayed for 3 nights, because Mr. Takahashi came all the way from the other side of the planet  (Japan) and stayed at this same place 10 years ago.

Here are some notes he left on the guest notebook of the residencia: 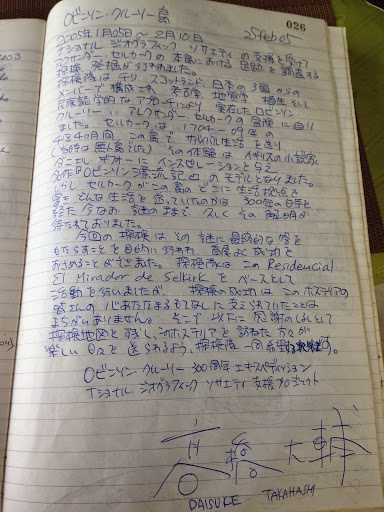 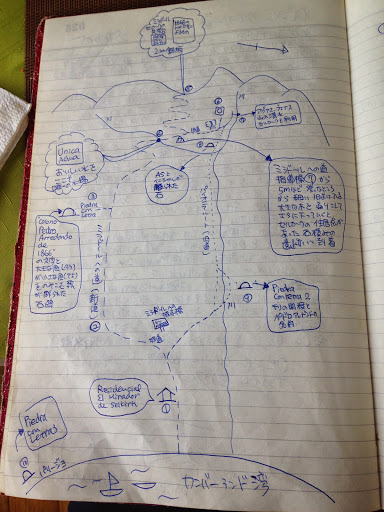 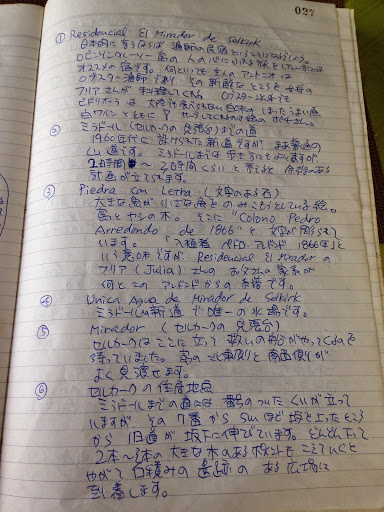 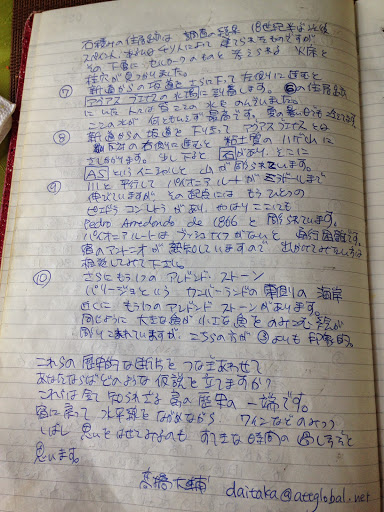 It basically says what kind of route he took to find the evidence, and the explanation of each point. 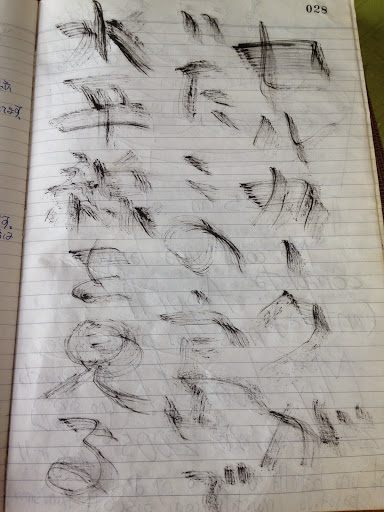 It says: Looking at the horizon from the island where Selkirk stayed.

Let me close this entry with some photos of the authentic food of the island made by Ms. Julia (who used to be a cook). She often uses lobster and fish which her husband (fisherman) brings. Looking at the guest notebook, many people including Mr. Takahashi (and me) enjoy her food. 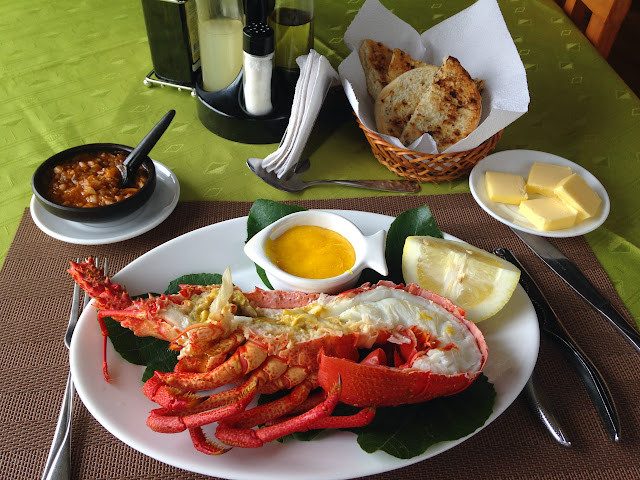 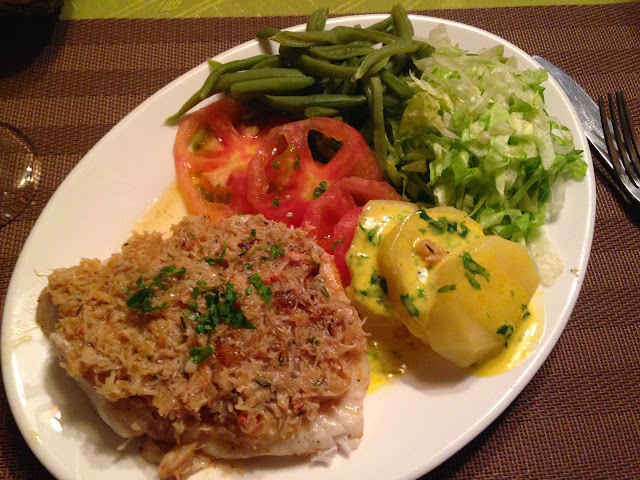 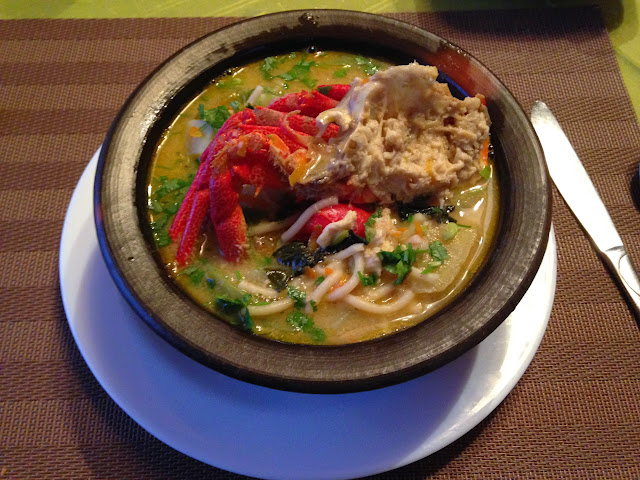 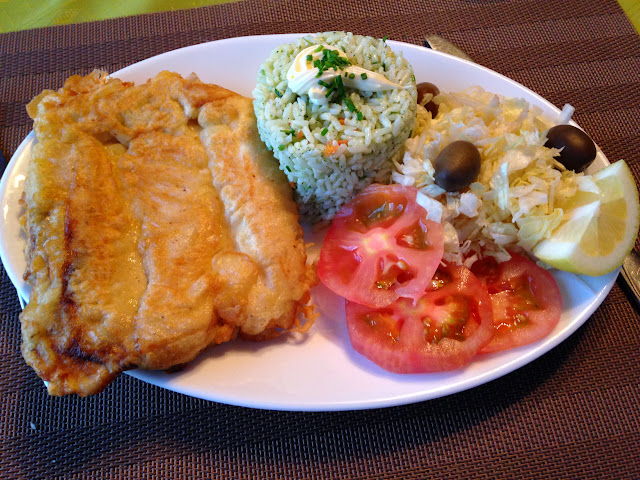 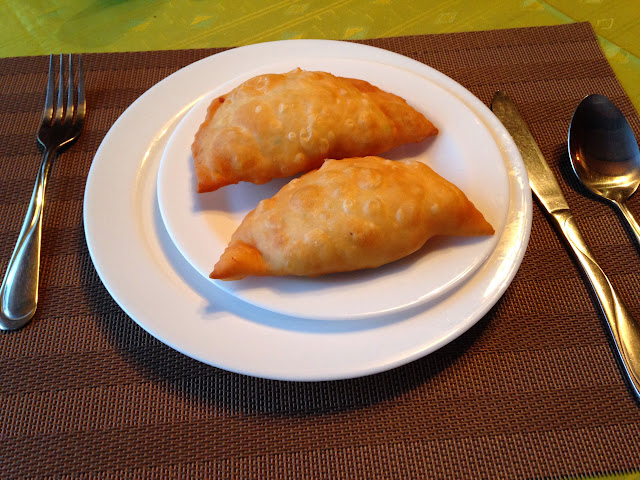 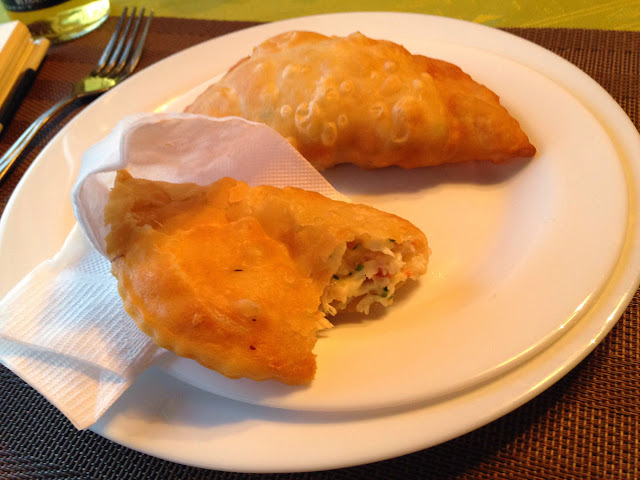 Well, I think I have to finish here, since I am really getting hungry.

If you have a chance to come to the island and have no clue on where to stay, I really recommend this place (Residencia Mirador Selkirk). Speaking of which, on the previous post (The Robinson Crusoe Island 1), I added the additional information (list of accommodation of the Robison Crusoe Island) which I hope would be useful for future traveler.

Comments, questions and additional information are more than welcome.

The next entry is about the real situation I saw on the island.

1st entry: General information and how to get there
3rd entry: The real situation I saw on the Island

2 thoughts on “The Robinson Crusoe Island 2”