When I was a university student in Japan, I did not think so much about the quality of education that I was receiving, let alone the country’s educational policy.

In Latin America (Chile, Mexico, Colombia, etc.) students are pretesting at national levels to improve the quality of tertiary education, especially for free education or more investment in it.

Although those are valuable movements, the money is not everything to improve the quality of education, as well as guarantee of employment.
According to an article of OECD called “Smart policies matter in education“, Korea is a good example of it. 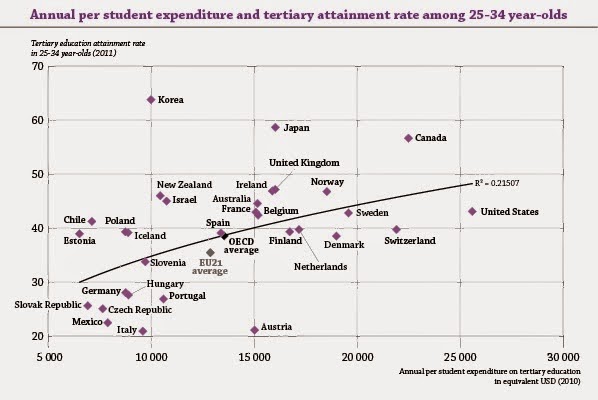 The graph shows that Korea, compared to other countries, invest less in each student of tertiary education, but produce a high number of graduates in the young population (25-34 year-old).

However, with 75%, graduate employment among their 25-34 year-old with a tertiary qualification in Korea are among the lowest in OECD countries (average 82%). That is, one out of four graduates does not have a job.

I hope students in Latin America keep protesting in order to improve the quality of education, not only in investment but also in connection between graduate and employment, that is, better educational system at a national level. And other countries can learn something from those young activists.